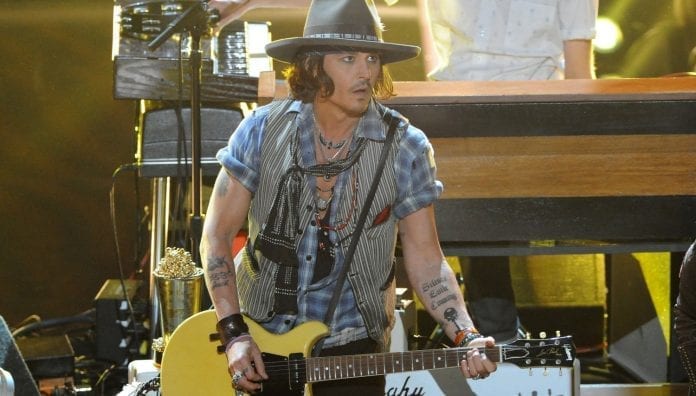 The Hollywood Vampires were joined on stage at the Greek Theatre in Los Angeles last night by Aerosmith’s Steven Tyler and Marilyn Manson. You can watch video of the show below.

The two rockers joined forces with, Aerosmith guitarist Joe Perry as well as frontman Alice Cooper, as the Vampires played a show ahead of the release of their imminent new album Rise, which is set to drop on June 21st.

Manson performed the Alice Cooper classic “I’m Eighteen” and Tyler helped out on “Train Kept A-Rollin’” a regular cover by Aerosmith. According to UCR, Cooper had recently revealed how The Vampires guitarist Johnny Deep had penned most of the lyrics for Rise.

Cooper said that Depp was inspired by his emotional experiences after getting a lot of negative press from media outlets. Speaking in an interview with AZ Central, Cooper refuted news reports that Depp was unwell:

“There were so many things that were written about him that were untrue in the last year,” . “I’m sitting there reading a newspaper. Sitting right across from him in Moscow, and I say, ‘It says here you weigh 110 pounds.’

“He weighs like … I’ve never seen him look so good… the guy’s in really great shape. ‘It says here that you’re depressed.’ He’s playing guitar and laughing, writing songs … every single thing I read about him was absolutely the opposite of what was going on.”

Cooper also addressed allegations that Depp spends 30,000 dollars a month on wine:
“He goes, ‘Yeah. I don’t drink it. Wine is a great investment. You put it in your wine cellar and you let it get older.

The Stooges Are Over According To Guitarist