Home Music News All You Need To Know About This Year’s Forbidden Fruit Festival! 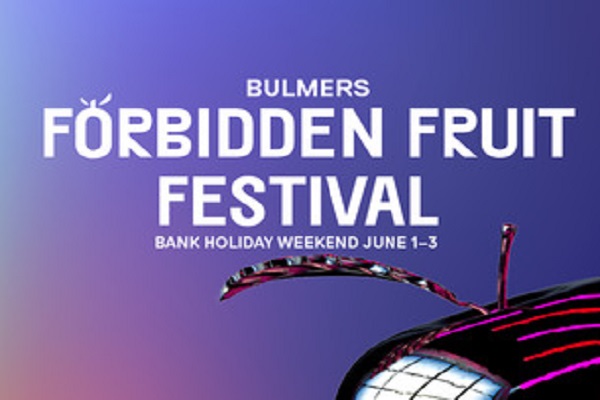 The 9th Forbidden Fruit will return to the sublime grounds of the Irish Museum of Modern Art this coming June bank holiday weekend.

Dublin’s city centre multi-stage music and arts festival has gone from strength to strength and this year an ever energetic and eclectic line up will deliver an awesome musical experience.

Here’s a look at some of the acts playing this year’s Bulmers Forbidden Fruit Festival:

One of the hottest rising stars of the grime world, the hugely talented SKEPTA will be joining us next year. The Guardian cited his track “Shut Down“ as Track of the Year 2015.

Skepta shook off the decadence that plagued grime’s lean years with this infectious triumph of self-rediscovery, in a year that saw the rapper love bombed by Kanye West and Drake.

Since emerging as a producer and MC in 2004, Skepta has become one of the most significant British artists in music today. The Mercury Prize winner and BRIT Award nominee have built a diverse audience through both recordings and live performances. Bound to be a riot of a show.

Detroit rapper DANNY BROWN will once again take to the Forbidden Fruit stage following his highly anticipated, crowd-pleasing set at Forbidden Fruit in 2017. His fourth studio album ‘Atrocity Exhibition’ was among one of the highly praised hip-hop projects in 2016.

Atrocity Exhibition is heralded as one of the freshest and boldest-sounding rap albums in recent years, inspired by the work of Talking Heads and Joy Division that nonetheless sounds like nothing else. Along with contributions from producers like Evian Christ, Petite Noir, Black Milk and The Alchemist.

MURA MASA, the stage name of British producer Alex Crossan. He’s been picked up by BBC Radio 1 with tracks such as ‘Lotus Eater’ and his ‘Lovesick’ single reached number 1 on the UK & USA Spotify viral charts. Crossan has been making waves in a short period. Last year he headlined the debut All Together Now and having collaborated with Christine & The Queens, Damon Albarn, ASAP Rocky, it’s been quite the year for Crossan so keep a watchful eye for more things to come!

ELBOW have arguably created one of the most remarkable stories in British contemporary music. Formed in Bury in the 90’s, elbow’s history now encompasses seven studio albums, a long list of awards and a place in the roll call of great British bands.

Their most recent albums, ‘The Take Off and Landing of Everything’ (2014) and most recent ‘Little Fictions’ (2017) both debuted at Number One in the UK album charts and the band’s touring schedule has seen them play to ever increasing audiences across the world.

The band’s two Glastonbury Pyramid Sunset Slots are regarded by critics as amongst the finest moments in the festival’s long history. This incredible band will headline the Monday of Forbidden Fruit 2019. Having always had such a loyal base of Irish fans – this is sure to be a very special show, hopefully with some fan favourites in the mix with the likes of ‘Lippy Kids’, ‘One Day Like This’ and ‘Mirrorball’.

Fontaines D.C. replaces FIRST AID KIT who have pulled all of their 2019 summer festivals and concerts. Sadly, this means that they will no longer be in Kilmainham this June Bank Holiday. In an open letter the band explained:

Beloved listeners and followers,We’re devastated to have to cancel the planned summer dates this year. We were super excited to play, but because of unforeseen medical circumstances we simply cannot do the shows. All will be okay and we look forward to seeing you soon again. Lots of love and magic from Stockholm, Klara & Johanna

JON HOPKINS has been an elusive character, known to most as an expert producer, Ivor Novello-nominated composer of film scores, remixer and long-term collaborator of Brian Eno and Coldplay. Yet, as Hopkins freely admits, the fact that his solo albums to date have been rather overshadowed by his work with others has meant that he’s been able to quietly develop his own identity, style and sound.

He will play this year’s festival for a very rare DJ set. Earlier this year, he released ‘Singularity’, his first studio album in five years. Receiving high praise from the music press, this will be the first time Irish fans will get to experience his current show which he has just toured the world with – this is sure to be a must-see set!

Newer to the scene, but not to be underestimated, 24-year-old Jordon Alexander aka MALL GRAB is breaking all kinds of moulds on his rapid rise to recognition on the world stage. Expect original house and techno material from this energetic newcomer. Fresh from a fully sold out 8 show Irish tour it’s clear to see that Irish audiences have their finger on the pulse!

MARIBOU STATE are an English live electronic group, headed up by Chris Davids and Liam Ivory. Since 2011, the pair have steadily built a glowing international reputation via a string of well-loved EPs and a fistful of remixes (including Kelis, Fatboy Slim and Lana Del Rey).

Radio heavyweights like Zane Lowe, Huw Stephens, Annie Mac, B. Traits, Pete Tong and Gilles Peterson amongst others, have been quick to support with praise from the electronic press flowing thick and fast, too. Playing at this year’s All Together Now with their sonic landscapes and now with their second studio album ‘Kingdoms In Colour’ under their belt, this is one act you should make sure to check out!

Berliner PAUL KALKBRENNER is a unique international talent. With eight studio albums under his belt and more than 2.3 million Facebook fans, he is one of techno’s biggest superstars. Most famous for his platinum-selling track Sky & Sand which sold over 200,000 copies – Kalkbrenner is renowned for his live shows. Released in May of this year, ‘Parts Of Life’ is the eighth LP from the German producer and the first since 2015’s 7, his major label debut.

DANIEL AVERY released his full studio album ‘Song For Alpha’ back in April. To coincide with the release of his second long player, Avery has unveiled immersive album visuals from London design studio Flat-e, who have crafted stunning digitally manipulated videos for each track on the record. This is bound to be an immersive and hypnotic experience.

From Montreal, HOMESHAKE will perform at Forbidden Fruit for the first time. Previously a guitarist with Mac DeMarco’s touring band this is the solo project from Peter Sagar. Combining elements of yacht rock and synth-pop sounds he brings his endearing and charismatic charms to the stage. His third album ‘Fresh Air’ has similar electro-R&B sounds to his previous two albums ‘In The Shower’ and ‘Midnight Snack’. Expect laid back vibes, soulful vocals and plenty of personality from Sagar.

ROSS FROM FRIENDS a UK producer also known as Felix Clary Weatherall will join us for next years Forbidden Fruit outing. His debut album ‘Family Portrait’ is out now on Flying Lotus’s label. Growing up listening to his Dad’s taste in music from 80’s dance and disco and inspired by those synthesisers and drum machines.

Weatherall has been making music in various forms from a young age, both in bands and solo. With extensive European and international tour dates, an ever growing fanbase and his rapid popularity, it’s clear to see his continued rise looks set.

SAINT SISTER are an Irish duo labelled as ‘atmosfolk’ as they bring their soulful vocal harmonies, dreamy synth and electro-acoustic harp to the Forbidden Fruit stage for the first time. With the release of their debut album ‘Shape of Silence’ earlier this year, along with extensive touring and collaborations with fellow Irish acts such as Jafaris and Kormac – their sound has matured and developed, further cementing the fact that this duo are ones to watch.

Forbidden Fruit Night are ticket only events. After party tickets are only valid with Forbidden Fruit Festival Saturday, Sunday or Monday Ticket or Weekend Wristband.

Tickets are available only on the festival site across the weekend. You need to also have a Forbidden Fruit Festival wristband for the relevant night or a day ticket in order to get in!

IMMA is approximately a 30 to 40-minute walk from the city centre, and an 8 mins walk from transport hub Heuston Station.

If you are cycling to IMMA you will find bicycle parking at the rear of the building, just before the entrance to the car park. Follow signs for the car park. There are also a number of Dublin Bikes stations near IMMA, including one right at the entrance on Military Road (outside Supervalu) and another on Kilmainham Lane

Take, or connect to, the Red line Luas (tram) to Heuston Station. IMMA is an 8 minute walk via Military Road. You can use the Route Planner to plan your visit using public transport.

IMMA is an 8 minute walk from Heuston Station, one of two major train stations in the city. Connolly Station is the other major station, which is connected to Heuston Station by the Red Luas line. Consult Irish Rail to plan your journey by train.

You can also reach IMMA by using one of the Hop-on Hop-off Tourist Bus services, all of which stop right outside IMMA’s Military Road entrance. You can use the Route Planner to plan your visit using public transport.

Concert-goers have been urged not to bring any backpacks or large bags to the Forbidden Fruit festival this weekend.

Organisers said on the Forbidden Fruit website that anyone planning to attend the event should leave their bags at home.

Gardaí have been searching handbags and have urged people to make any extra rain jackets or clothing as compact as possible.

To grab your tickets go here.

Jack Osbourne Says Ozzy Is Among The Greats

Fatal Plane Crash That Killed Buddy Holly Could Be Reinvestigated