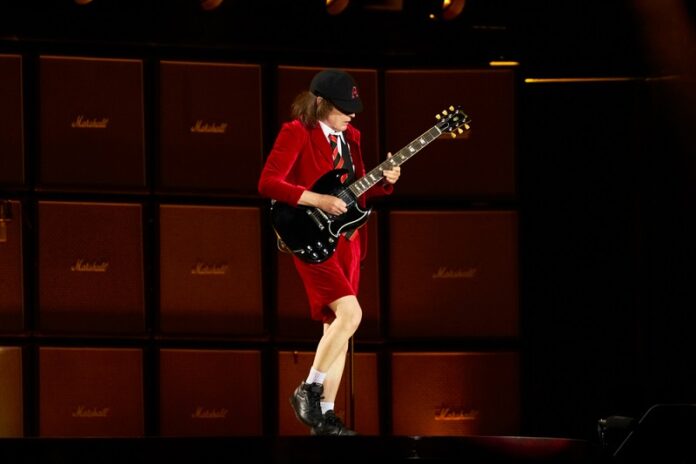 AC/DC’s Angus Young has denied rumours that Bon Scott helped to write “Back In Black”. Bon Scott was the lead singer of the band until his death in 1980.

Brian Johnson took Scott’s place as the band’s frontman and recalled the making of this track on it’s 40th anniversary last year.

The band released the track months after the late frontman’s death.

Speaking at the time, Johnson said, “I remember ‘Back in Black’ was particularly difficult because the boys were saying, ‘Listen we want this song in memory of Bon. But we don’t want it to be sad or maudlin, we want it to be a good thing, positive song”.

In a new interview, Angus Young said that Scott did not have any input into the track. He did say that Scott played a part in some early demos.

“Bon never really got the chance,” the guitarist explained.

Adding, “At the time, me and (founding AC/DC rhythm guitarist) Malcolm (Young) were writing songs, which became the songs for Back In Black”.

Young said that Scott played an integral part in making demos that would later turn out to be two of the band’s hits, “Hells Bells” and “Have A Drink On Me”.

“Anyhow, we were working away, and it was on an intro which was actually what became the intro for ‘Hells Bells’.

Young also added, “Originally Bon started as a drummer. So Bon got behind the drum kit so we could try and work out this intro, and how we wanted to do it”.

“And the other one was ‘Have A Drink On Me’, a riff Malcolm was playing around with. So we worked out the intro on that and how the song was gonna go. He had Bon tapped to do a demo for that. So that was it, really”.

Young added, “If you were looking up what Bon had done, it was really just to help us with those demos on the drums. And he even said to us, as we were knocking off in the night time, ‘Look, we’ll hook up next week”.

Young expressed his sadness that himself, Malcolm and Bon Scott were unable to finish those demos.

He also said, “He’d (Bon) been working on some lyrics. He said ‘We’ll hook up next week and maybe the three of us can just start going through stuff.’ But unfortunately, he passed before that”.

Angus Young on “Highway to Hell”

Angus Young also admitted that he came up with “Highway To Hell” whilst having a bathroom break!