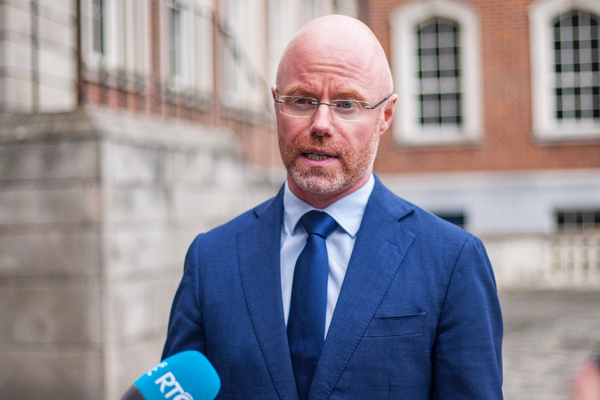 It is unclear whether or not the minister was in his Wicklow home at the time.

This news around Donnelly comes as the home of Tánaiste Leo Varadkar was also targeted by protestors last month. Varadkar was not even in the country at the time. He was at an EU meeting in Brussels.

They aimed abusive comments at the Tánaiste, calling him a “treasonous snake”.

Gardaí said that  “persons attending this protest moved to outside a private residence in the Dublin 8 area”.

Last month also saw a gathering of protestors set up outside the home of the Chief Medical Officer Tony Holohan.

Gardaí released this statement, “Gardai were alerted to a number of protesters outside a residence in Dublin this afternoon Sunday 3, October, 2021 at approximately 1pm”.

“Gardai attended and the protest ended without incident at 2.30pm”. More on this here.

Donnelly and his “suit and little bag”

The gathering of protests outside Donnelly’s home was also videoed and widely shared by anti mask and vaccine protestors.

One video shows a man screaming into an intercom outside the home of Stephen Donnelly.

The man tried to shield his face from the video doorbell with a homemade sign. He can also be heard shouting about Mr Donnelly’s “suit and little bag”.

“Gardaí attended the scene of a demonstration in the Wicklow area on the afternoon of Sunday, 28th November, 2021”, a Garda spokesperson said. “All persons present later dispersed without incident”.

This is also not the first time that protestors have gathered outside the Health Minister’s home.

Protestors outside the Wicklow TD’s home, forcing Donnelly to erect a six foot fence around his home earlier this year. Other incidents included items being thrown at his house and left on his doorstep.

Stephen Donnelly is married and a father of three young children.

Iconic Southside Pub Kiely’s Will Be Wiped Out To Make Way...