Home Classic Albums You Can Listen To Black Sabbath’s ‘Vol 4’ From Midnight Tonight! 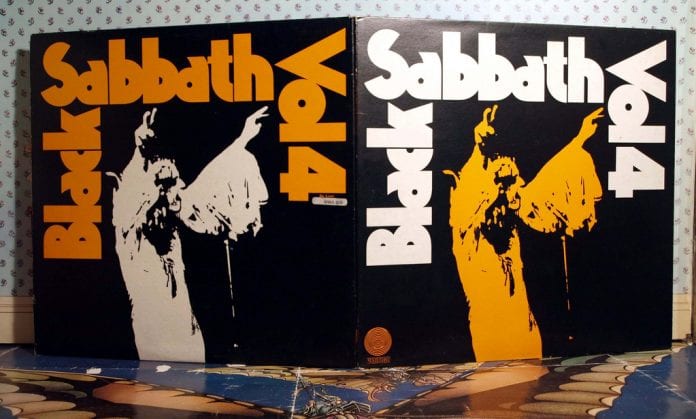 In June 1972, Black Sabbath reconvened in Los Angeles, California to begin work on their fourth album at the Record Plant Studios. The recording process was plagued with problems, many due to substance abuse issues. While struggling to record the song “Cornucopia” after “sitting in the middle of the room, just doing drugs”, Bill Ward feared that he was about to be fired from the band. “I hated the song, there were some patterns that were just horrible”, Ward said. “I nailed it in the end, but the reaction I got was the cold shoulder from everybody. It was like ‘Well, just go home, you’re not being of any use right now.’ I felt like I’d blown it, I was about to get fired”. However, the seeds were planted for what would eventually be the demise of the classic Sabbath lineup. As Butler told Guitar World in 2001: “Yeah, the cocaine had set in. We went out to L.A. and got into a totally different lifestyle. Half the budget went on the coke and the other half went to seeing how long we could stay in the studio… We rented a house in Bel-Air and the debauchery up there was just unbelievable.” In the same interview, Ward said: “Yes, Vol. 4 is a great album, but listening to it now, I can see it as a turning point for me, where the alcohol and drugs stopped being fun.”

Vol. 4 demonstrates Black Sabbath beginning to experiment with the heavy sound they had become known for. Although some of the album’s songs are in their trademark style, others demonstrate a more sensitive approach which the band had never attempted before. This is best exemplified by the song “Changes”. Written by Tony Iommi, it is entirely in the form of a piano ballad with mellotron. Although the band had used piano on some songs previously, it had played only a minor role in the songs.

The album, Tony Iommi told Circus’s sister magazine Circus Raves, “was such a complete change, we felt we had jumped an album, really… We had tried to go too far.”

At least two songs on the album reference the use of cocaine, with the lyrics and title of “Snowblind” being an example of this. “Cocaine” is whispered quite audibly after the first verse, approximately 41 seconds into the song. (During live performances Osbourne would typically scream the word at the top of his lungs after every verse.)

The album cover features a monochrome photograph of Ozzy Osbourne with hands raised, taken during a Black Sabbath concert. The album’s original release features a gatefold sleeve with a page glued into the middle. Each band member is given his own photo page, with the band on-stage (and photographed from behind) at the very centre. The reissues on WWA and NEMS duplicated both the gatefold sleeve and, unusually, the pages.

The album’s original cover art has proved iconic, and is parodied on the 1992 Peaceville Volume 4, the 1992 Volume Two EP by the band Sleep, the 1994 Planet Caravan EP by Pantera and the 2007 album Vol. 1 by the band Church of Misery. In the liner notes of Vol. 4, Black Sabbath thank “the great COKE-Cola Company”, another blatant drug reference. Also during the Vol. 4 era, bassist Geezer Butler sported a sticker on his white bass that stated “Enjoy CoCaine”, a parody of the slogan “Enjoy Coca-Cola.”

Vol. 4 was released in September 1972, and while critics of the era were dismissive of the album, it achieved gold status in less than a month, and was the band’s fourth consecutive release to sell one million copies in the United States. It reached number 13 on Billboard’s pop album chart and number 8 on the UK Albums Chart. The song “Tomorrow’s Dream” was released as a single but failed to chart. Following an extensive tour of the US, the band toured Australia for the first time in 1973, and later Europe. Black Sabbath also appeared on the UK’s Top of the Pops in 1973, sharing the stage with such diverse acts as Engelbert Humperdinck and Diana Ross.

The album had been reissued twice as a budget release called Children of the Grave with a live version of said song.

Kerrang! magazine listed the album at No. 48 among the “100 Greatest Heavy Metal Albums of All Time”.

In June 2000, Q magazine (6/00, p. 69) placed Vol. 4 at number 60 in its list of The 100 Greatest British Albums Ever and described the album as “the sound of drug-taking, beer-guzzling hooligans from Britain’s oft-pilloried cultural armpit let loose in LA.” In an interview with Q magazine, Beck Hansen named the “Supernaut” riff as his all time favourite, equal with Neil Young’s “Cinnamon Girl.” Frank Zappa had also identified that song as one of his all time favorites. Supernaut was also one of Led Zeppelin drummer John Bonham’s favorite songs by Sabbath.

All music written by Black Sabbath (Geezer Butler, Tony Iommi, Ozzy Osbourne and Bill Ward); all lyrics by Geezer Butler. Note that the song subtitles “The Straightener” and “Every Day Comes and Goes” do not appear on original North American pressings of the album and all the remastered editions.

The Classic Album at Midnight – The Clash’s London Calling