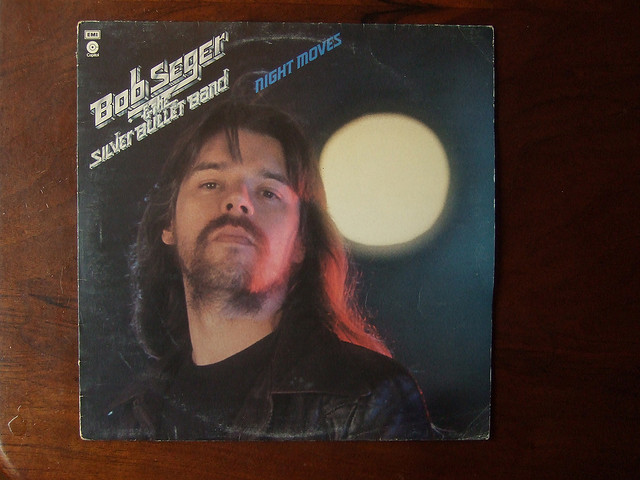 Night Moves is then ninth studio album by Bob Seger and the first to include the Silver Bullet Band. It released on October 22nd 1976 and is now widley considered a rock classic.

Bob Seger recorded the bulk of Night Moves before Live Bullet brought him his first genuine success, so it shouldn’t come as a surprise that it’s similar in spirit to the introspective Beautiful Loser, even if it rocks harder and longer.

Throughout much of the album, he’s coming to grips with being on the other side of 30 and still rocking. He floats back in time, turning in high-school memories, remembering when wandering down ‘Mainstreet’ was the highlight of an evening, covering a rockabilly favorite in ‘Mary Lou’.

Stylistically, there’s not much change since Beautiful Loser, but the difference is that Seger and his Silver Bullet Band — who turn in their first studio album here — sound intense and ferocious, and the songs are subtly varied. Yes, this is all hard rock, but the acoustic ballads reveal the influence of Dylan and Van Morrison , filtered through a Midwestern sensibility, and the rockers reveal more of Seger’s personality than ever.

Seger may have been this consistent before (on Seven, for example), but the mood had never been as successfully varied, nor had his songwriting been as consistent, intimate, and personal. Thankfully, this was delivered to a mass audience eager for Seger, and it not only became a hit, but one of the universally acknowledged high points of late-’70s rock & roll. And, because of his passion and craft, it remains a thoroughly terrific record years later.

3. The Fire Down Below