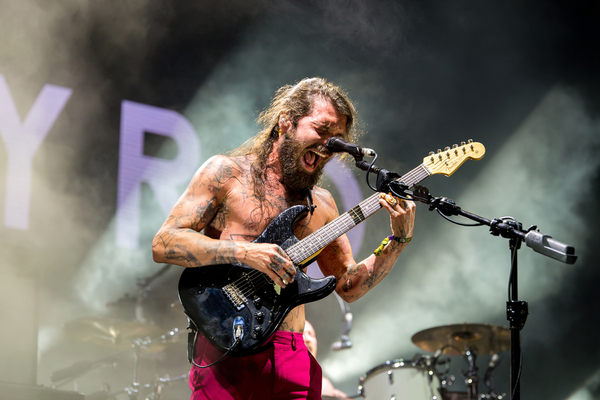 Biffy Clyro will release a documentary which will explore the making of their ninth studio album The Myth Of The Happily Ever After.

Titled Biffy Clyro: Cultural Sons Of Scotland, the documentary will be available to view from February 25. It will be shown on Amazon Prime Video and Amazon Music Unlimited.

It will also be screened across four UK cinemas for one night only. These cinemas are the Rio cinema in Dalston, Dundee’s DCA, Edinburgh’s Cameo and the Everyman in Glasgow.

The Biffy Clyro film’s synopsis reads, “With unprecedented access to the band, the new feature length film takes viewers on the journey with Simon, Ben and James as they return to their home in Ayrshire to create their latest, critically acclaimed album in the most unusual of studio environments”.

“The film explores how the experience of recording an album in Scotland for the first time prompted the band to reflect on the importance of where they’re from, how this has influenced their career to date and reinforced their lifelong bond as friends and bandmates”.

Biffy Clyro frontman Simon Neil also adores the idea of making this album in the same location where he wrote his first ever track.

“In the same part of the world as I wrote my very first song is where we’re making this record, and there’s something really pure about that”, he said.

James Johnston also stated that working in a band with siblings are, “probably the best years you’ll ever have in your life”.

The Biffy Clyro bassist also added, “Everyone should join a band. If you get a chance to go join a band with your brothers or your sisters, or people you consider to be a brother or a sister. That’s probably the best years you’ll ever have in your life”.

“We don’t need all the bells and whistles for us to be fulfilled and happy. We just need the three of us to be making music together and have that vibe in a room – and that’s what keeps our hearts beating”, drummer Ben Johnston also stated.

Last month, the band said that they were “gutted” after they were forced to postpone their European Tour.

The band were due to start their rescheduled tour this month. However, the tour has also been pushed back to August and October of this year.