Home Music News Create a track with Heineken and hear it live at Electric Picnic! 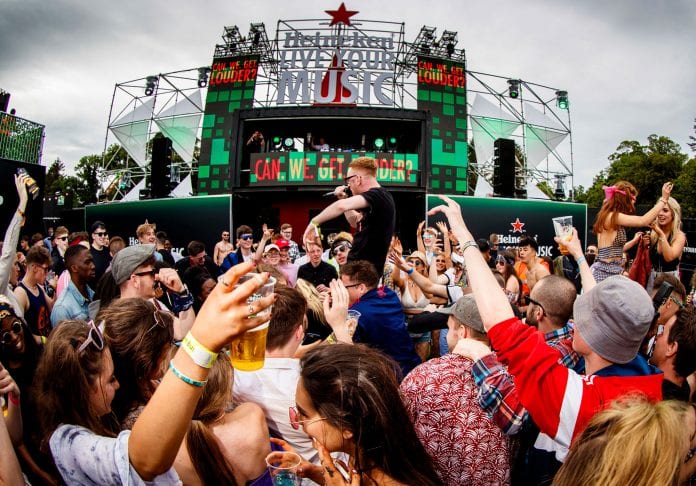 Heineken Live Your Music challenges music fans to become a producer for a chance to win tickets to Electric Picnic.

Ever wished about being a music producer but you know, didn’t have any talent or musical skills? WELL WISH NO MORE FRIENDS because Heineken are making your dreams come true.

Ahead of Live Your Music’s debut appearance at Electric Picnic, Heineken puts the power into the hands of music fans across the country to co-create an Electric Picnic anthem with DJ/producer LoCutz. This Sunday at 6PM, fans will be invited to log onto facebook.com/HeinekenIE and join host 2FM’s Tara Stewart and LoCutz in the Heineken Live Your Music studio where fans and artists alike will be challenged to create a track in just 10 minutes.

Starting from scratch, LoCutz will build a track solely based on the feedback of the crowd watching. All those who interact, will have the chance to win a pair of tickets to Electric Picnic and hear the track they helped co-create live!

Taking inspiration from the greatest club and arena experiences around the world, the fully-responsive Live Your Music space will host Electric Picnic’s first-ever 360 degree lighting rig, along with CO2 cannons, over 20 DJs and MCs – all powered by the crowd.

So how does this work exactly, you ask. Well it’s all through some thoroughly fancy technology.

Throughout the weekend, the custom built Heineken Starmometer will gauge the crowd’s energy by tracking noise levels, body movement and heat. Every beat, pulse and move made by the crowd will generate energy peaks that unlock a series of epic surprises to create the ultimate Live Your Music moment. State-of-the-art visuals will be curated live and screened in real time with the crowd centre stage in the Live Your Music space.

A sizeable line-up of local and international DJ and MC talent will perform at the Live Your Music space across the weekend, to entertain festival-goers as they unleash their energy. The line-up includes Belgian DJ and producer The Magician, whose remix of Lykke Li’s ‘I Follow Rivers’ is one of the biggest dance tunes of the decade; hip-hop / AV maestro DJ Yoda, who recently collaborated with Dr. Dre and Banksy; plus British DJ duo Tough Love, who are fresh off the back of a number of Ibiza club appearances this summer.

Aside from the live acts performing throughout the weekend, music fans can unlock more experiences in the Live Your Music Rooms; three exclusive areas where the crowd programs the lighting, the visuals and the atmosphere in The Club, The Music Box and In Scope.

The Club – allows festival-goers to choose the essentials of every good club experience: immense tunes, strobes, smoke and visuals.

The Music Box – visitors use hidden drum pads, synth triggers and samples to produce the soundtrack to fans’ festival experience.

In Scope – uses innovative GIF-capturing technology that captures music fans in real time and projects them onto the giant LED screens on-stage, to become part of the show.