Advertisement
Home Classic Albums You Can listen To David Bowie’s ‘The Rise & Fall Of Ziggy... 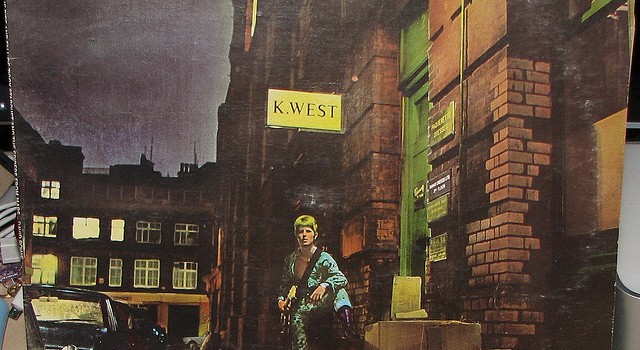 The Rise & Fall of Ziggy Stardust & The Spiders From Mars is the fifth studio album by David Bowie. The album featured one of his famous alter egos Ziggy Stardust.

Borrowing heavily from Marc Bolan’s glam rock and the future shock of A Clockwork Orange, David Bowie reached back to the heavy rock of The Man Who Sold the World for The Rise and Fall of Ziggy Stardust and the Spiders from Mars.

Constructed as a loose concept album about an androgynous alien rock star named Ziggy Stardust, the story falls apart quickly, yet Bowie’s fractured, paranoid lyrics are evocative of a decadent, decaying future, and the music echoes an apocalyptic, nuclear dread.

Fleshing out the off-kilter metallic mix with fatter guitars, genuine pop songs, string sections, keyboards, and a cinematic flourish, Ziggy Stardust is a glitzy array of riffs, hooks, melodrama, and style and the logical culmination of glam.

Mick Ronson plays with a maverick flair that invigorates rockers like ‘Suffragette City’, ‘Moonage Daydream’, and ‘Hang Onto Yourself’,  while ‘Lady Stardust’, ‘Five Years’,  and ‘Rock ‘n’ Roll Suicide’ have a grand sense of staged drama previously unheard of in rock & roll.

And that self-conscious sense of theater is part of the reason why Ziggy Stardust sounds so foreign.Bowie succeeds not in spite of his pretensions but because of them, and Ziggy Stardust – familiar in structure, but alien in performance — is the first time his vision and execution met in such a grand, sweeping fashion.

8. Hang on to Yourself

The Classic Album at Midnight – U2’s The Unforgettable Fire

You Can Hear Fleetwood Mac’s ‘Rumours’ Album In Full Tonight From...