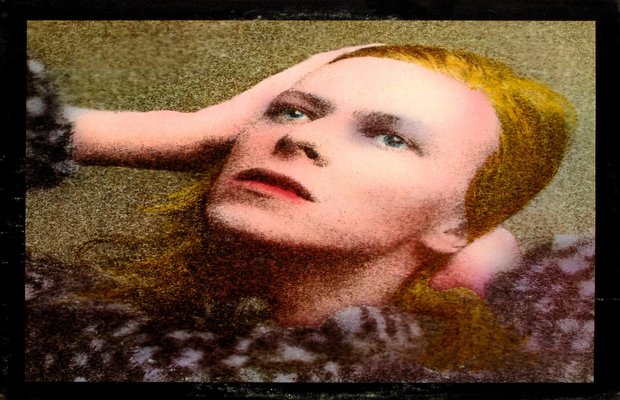 Hunky Dory is the fourth album by English singer-songwriter David Bowie, released by RCA Records in 1971. It was his first release through RCA, which would be his label for the next decade. Hunky Dory has been described by Allmusic’s Stephen Thomas Erlewine as having “a kaleidoscopic array of pop styles, tied together only by Bowie’s sense of vision: a sweeping, cinematic mélange of high and low art, ambiguous sexuality, kitsch, and class.”

The style of the album cover was influenced by a Marlene Dietrich photo book that Bowie took with him to the photo shoot.

With new bass player Trevor Bolder replacing Tony Visconti, Hunky Dory was the first production featuring all the members of the band that would become known the following year as Ziggy Stardust’s Spiders From Mars. Also debuting with Bowie, in Visconti’s place as producer, was another key member of the Ziggy phase, Ken Scott. The album’s sleeve would bear the credit “Produced by Ken Scott (assisted by the actor)”. The “actor” was Bowie himself, whose “pet conceit”, in the words of NME critics Roy Carr and Charles Shaar Murray, was “to think of himself as an actor”.

Musical biographer David Buckley said of Hunky Dory, “Its almost easy-listening status and conventional musical sensibility has detracted from the fact that, lyrically, this record lays down the blueprint for Bowie’s future career.” The opening track, “Changes”, focused on the compulsive nature of artistic reinvention (“Strange fascination, fascinating me/Changes are taking the pace I’m going through”) and distancing oneself from the rock mainstream (“Look out, you rock ‘n’ rollers”). However, the composer also took time to pay tribute to his influences with the tracks “Song for Bob Dylan”, “Andy Warhol” and the Velvet Underground inspired “Queen Bitch”.

Following the hard rock of Bowie’s previous album The Man Who Sold the World, Hunky Dory saw the partial return of the fey pop singer of Space Oddity, with light fare such as “Kooks” (dedicated to his young son, known to the world as Zowie Bowie but legally named Duncan Zowie Haywood Jones) and the cover “Fill Your Heart” sitting alongside heavier material like the occult-tinged “Quicksand” and the semi-autobiographical “The Bewlay Brothers”. Between the two extremes was “Oh! You Pretty Things”, whose pop tune hid lyrics, inspired by Nietzsche, predicting the imminent replacement of modern man by “the Homo Superior”, and which has been cited as a direct precursor to “Starman” from Bowie’s next album The Rise and Fall of Ziggy Stardust and the Spiders from Mars.

Bowie had been without a recording contract when he started work on the album at Trident Studios in April 1971. RCA Records in New York heard the tapes and signed him to a three-album deal on 9 September 1971, releasing Hunky Dory on 17 December. Supported by the single “Changes”, the album scored generally favourable reviews and sold reasonably well on its initial release, without being a major success. Melody Maker called it “the most inventive piece of song-writing to have appeared on record in a considerable time”, while NME described it as Bowie “at his brilliant best”. Stateside, Rolling Stone opined “Hunky Dory not only represents Bowie’s most engaging album musically, but also finds him once more writing literally enough to let the listener examine his ideas comfortably, without having to withstand a barrage of seemingly impregnable verbiage before getting at an idea”. However, it was only after the commercial breakthrough of Ziggy Stardust in mid-1972 that Hunky Dory became a hit, climbing to #3 in the UK charts. In 1973, RCA released “Life on Mars?” as a single, which also made #3 in the UK.

Bowie himself considers the album to be one of the most important in his career. Speaking in 1999, he said: “Hunky Dory gave me a fabulous groundswell. I guess it provided me, for the first time in my life, with an actual audience – I mean, people actually coming up to me and saying, ‘Good album, good songs.’ That hadn’t happened to me before. It was like, ‘Ah, I’m getting it, I’m finding my feet. I’m starting to communicate what I want to do. Now: what is it I want to do?’ There was always a double whammy there.”

All songs written by David Bowie, except where noted.