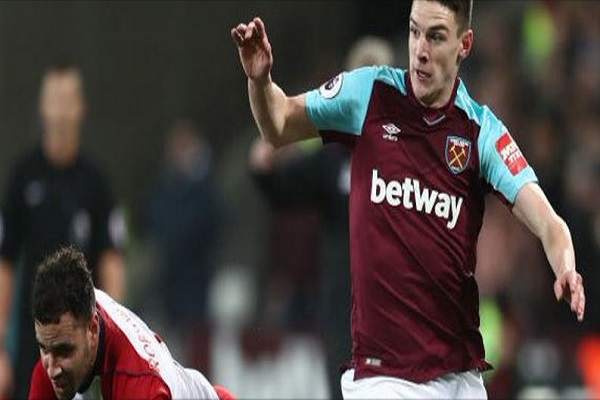 Declan Rice is expected to return to the West Ham team for tonight’s Premier League match against Crystal Palace at the London Stadium.

The Republic of Ireland Under 21 international missed Saturday’s F-A Cup defeat to Wigan due to a calf strain, but looks set to make his 20th appearance of the season for the Hammers this evening.

The 19 year old Londoner is said to have pledged his future to Ireland despite interest from England boss Gareth Southgate, and could make his senior debut in the upcoming International Friendly against Turkey.

According to the Irish Mirror, Southgate was keeping an interest in the player which sparked fears Rice jump ship after representing Ireland all the way to Under-21 level. But following contact between the player’s camp and FAI officials in recent days it’s looking good for the Republic.

Liverpool will look to avoid a third successive defeat, when they face Huddersfield at the John Smith’s Stadium. Swansea will climb off the foot of the table and out of the relegation zone if they beat Arsenal at the Liberty Stadium.

West Bromwich Albion are said to have turned down a loan bid from Derby County for Republic of Ireland international James McClean. The Championship promotion chasers will tighten their grip on second place if they beat Millwall at the Den this evening. Aston Villa could climb to third win a victory at Sheffield United.

Celtic will open up a 14-point lead at the top of the Scottish Premiership with a win over Hearts at Parkhead tonight. 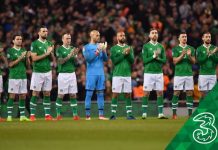 Sponsors 3 To Add To FAI’s Misery

Arsene Wenger To Leave Arsenal At The End Of The Season