Advertisement
Home Music News The Eagles would Reconsider Their Break-Up If Glenn Frey’s Son Joined The... 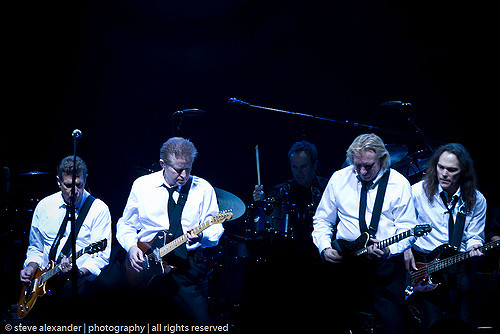 The Eagles have said that they would consider performing again if they were joined by Glenn Frey’s son, Deacon.

Don Henley told the BBC in March that The Eagles had broken up following the death of the band’s guitarist and founding member, Frey, in January this year.

While speaking to The Mirror, Henley said that if the band were to ever play again, it would have to be with Frey’s son, Deacon, joining them. Frey’s son frequently joined his father on stage during the last few years. Speaking of Frey’s son, Henley said, “You know, Glenn has a son who can sing and play quite well,”  adding,“And one of the only things that would make sense to me is if it were his son.”

The drummer also spoke about a possible reunion with Timothy B. Schmit, Joe Walsh and Jackson Browne saying “With Jackson, of course, we could do ‘Take It Easy’ and a couple other things, but the only way I would consider any kind of reunion, I think, would be with Glenn’s son, Deacon.”

The band’s last performance was in February at the Grammy Awards. The performance was their final farewell and a tribute to Frey. Speaking of the performance, the drummer said  “I think that was probably it. I think it was an appropriate farewell.”

The Pixies Tease New Album For This Year