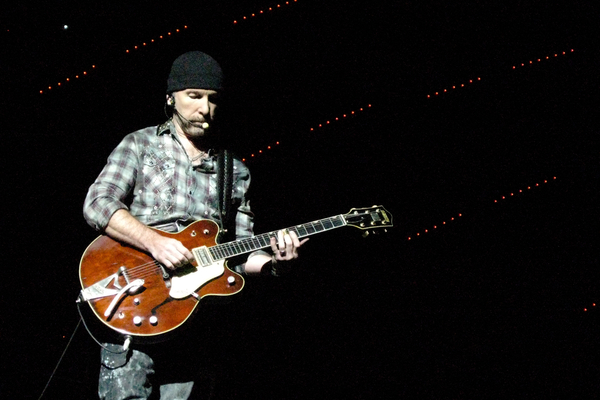 Stop the press! U2 guitarist, The Edge, has claimed that the band are currently working on a follow-up to 2017’s Songs of Experience. Minutes before speaking with Rolling Stone via Zoom, the guitarist had been working on a new song idea with bassist, Adam Clayton.

Originally planning to discuss the lesser-known tracks of Achtung Baby for the album’s 30th anniversary celebration, the story quickly became all about the amazing news of new material, and possible tour. Edge announced that the band are “firmly locked in the tower of song”, working away “on a bunch of new things”.

“I’m just having so much fun writing and not necessarily having to think about where it’s going to go. It’s more about enjoying the experience of writing and having no expectations or limitations on the process,” Edge explains.

Although the band has yet to settle on any producers at this stage, Edge firmly “enjoyed working with Martin Garrix,” and hopes to work with him “in the future”. However, he states that the band have not “made any firm decisions on what the next thing will be in terms of personnel. I just don’t know.”

Bar the newly released Your Song Saved My Life, U2 have not brought out any new material in the three years since 2019’s Ahimsa. YSSML has been released from the soundtrack to the animated film, Sing 2, where Bono provides the voice of lion rock star Clay Calloway.

“That’s not a thing that U2 normally does,” Edge says, “but it’s in the of spirit of mixing it up, keeping people guessing, and trying different things. It felt like a worthy thing. And also, it’s a movie about great songs and we felt very comfortable in the company that we were keeping there.”

The band have been away from touring since the encore leg of their incredible Joshua Tree 30th-anniversary tour in December 2019. Although no plans have been announced for the next tour, the band have suggested in the past of the possibility of celebrating the 30th anniversary of Zoo TV. Although Edge is keeping tight-lipped on their plans for the future, he says he remains very open to the idea of taking Zoo TV on the road again.

“I would love that, and I couldn’t rule it out,” Edge teases. “I think [Zoo TV] is such a current thought. Back then we were we’re dealing with the overload and kind of the whiplash of 24/7 news cycles, which hadn’t been known before. It was the overload of cable TV and hundreds and hundreds of channels. And little did we know that that was just the beginning of this avalanche of channels to kind of draw your attention.

“And so, yeah, I think Zoo TV could absolutely come back and be just as relevant,” Edge continues. “But we haven’t actually got to the point of doing anything more than this kind of talk, but I wouldn’t rule it out again. The [production] team [from that tour] are still with us. That’s what’s fun about it.”

Touring can take a lot out of any band, let alone those who are reaching their ‘golden years’, so Edge is currently enjoying his downtime and the process of creating new songs.

“I think everybody felt they needed some time at the end of the last tour,” Edge admits. “It really had been five years of being away. If we weren’t in the studio, we were on the road. And as much as momentum is your friend, there’s a moment where you stop getting fed by momentum and it starts to drain you. That’s because you need those moments of inactivity just to listen to music. We’re all enjoying that right now.”