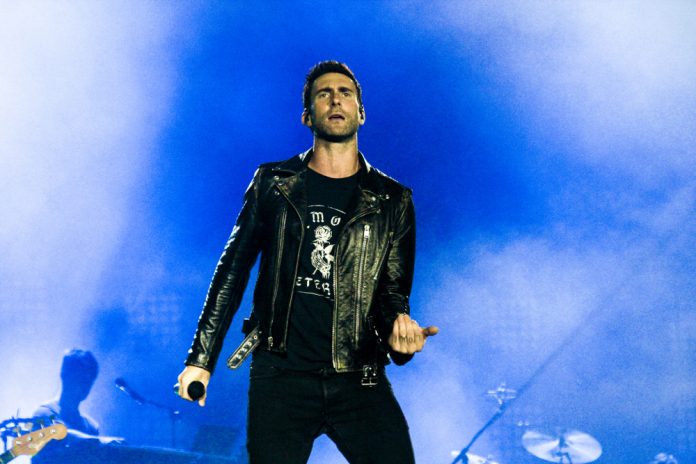 Lead singer, Adam Levine, has found himself at the centre of further criticism over Maroon 5’s Super Bowl Halftime Show. Levine’s decision to go topless has caused more than 50 formal complaints to U.S. regulators at the Federal Communications Commission (FCC).

The rocker bared his tattooed torso as Maroon 5 came to the end of the half time slot during the American football event in Atlanta Georgia on 3rd of February.

Actresses Abigail Breslin, Rosie Perez, and Aisha Tyler, were not pleased with Levine’s semi-naked display. The stars took to social media to express their criticism at the double standards regarding nudity.

As well as the celebrities, many viewers were not happy with the way Levine was able to go topless without any official reprimand.

Adam Levine goes shirtless in a lackluster Super Bowl halftime show performance. There goes the double standard as years ago Janet Jackson’s career practically went down the drain after accidentally showing her nipple in a wardrobe malfunction. #SuperBowl #JusticeForJanet pic.twitter.com/3TF7rVaqRA

Compare this to when there was an uproar when Justin Timberlake accidentally exposed Janet Jackson’s pierced nipple. That was when the Timberlake ripped away part of her top as part of their headlining performance.

More than 50 viewers of this year’s show took their complaints one step further and contacted government representatives at the FCC, making their disdain for the gender inequality clear in their filings, as obtained by The Hollywood Reporter.

One Texas resident wrote, “Seeing Adam Levine’s nipples was repulsive. Also the fact that there hasn’t been an immediate backlash like the Janet Jackson incident is disturbing and sexist,”

FCC officials have not made any statement on the Levine controversy, but Janet’s wardrobe malfunction incident, which became branded as “Nipplegate,” resulted in TV bosses at CBS with a $550,000 (€633,000 ) indecency fine. According to MN, the artists’ singles and videos were then blacklisted from certain radio stations and music channels.

Mike + The Mechanics Heading Back to Dublin