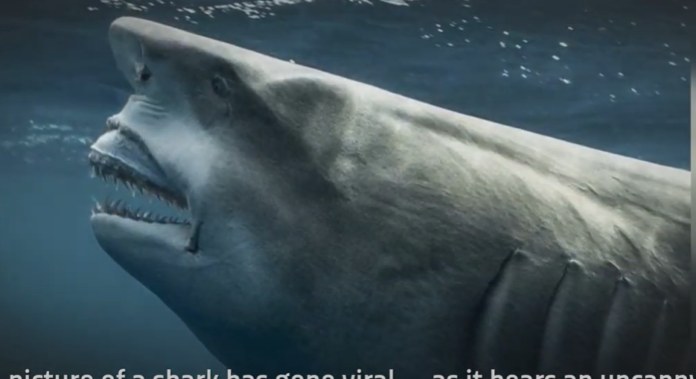 A picture of a 9ft shark has gone viral, because of its uncanny resemblance to former US President Donald Trump! Between the Buddhist monk doing rock covers and now sharks resembling Donald Trump. The internet can be a great place to be at times!

The image of the shark circulating online, shows it baring its jaws below the surface of the crystal clear water with its mouth open. The general public were left with their sides splitting at its resemblance to Trump.

An underwater videographer and photographer named Tyler Mansell is the man who took this remarkable snap. 27 year old Mansell is from Jupiter in Florida. He took the snap while diving off the coast of his home town on December 19.

“It completely blew up”

Tyler Mansell was understably in shock at the response his post of the “Trump lookalike” shark.

“When I first posted the photo, it completely blew up”, Mansell exclaimed.

He continued, “I was surprised to see the number of comments it got regarding Trump. I didn’t see it at first, but I can see what people are saying”.

He also added, “I think it’s funny and unique. I have never heard of anybody comparing a shark to a human”.

As mentioned already, the attention this post received was incredible.

One member of the public commented on the post online, “Tell me why I thought this was a Trump face swap”.

Another Twitter user commented, “Trump eating a Big Mac”, after seeing the photo.

This tweet probably sums it all up, “I wanna apologise in advance to the shark but he looks like Trump,”.

This all comes after Joe Biden was sworn in as the next US President last week.