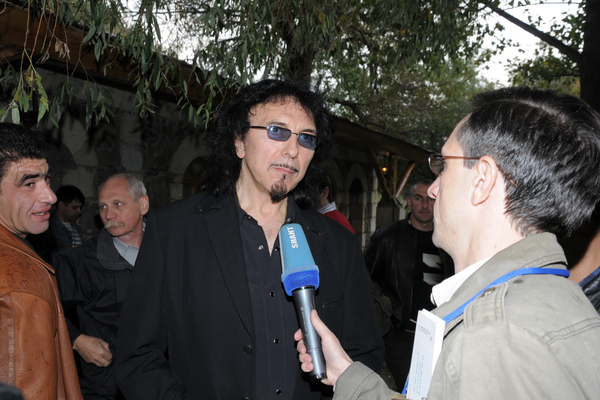 Black Sabbath guitarist and co-founder, Tony Iommi admits he is “not at all happy” about the recent release of Slapback. The track is a demo recorded by the band when Ronnie James Dio-fronted Black Sabbath in 1979.

The track was discovered by Gary Rees, stepson and executor of the estate of Sabbath’s long-time keyboardist Geoff Nicholls. Rees shared the track on YouTube last Friday, after finding it on a cassette tape which contained other material recorded during Sabbath’s 1979 song writing sessions for the following year’s album Heaven And Hell.

Iommi spoke with Rees during an interview on SiriusXM’s Trunk Nation with Eddie Trunk. During the chat with Rees, he expressed his frustration and revealed it had “left a really bad taste in my mouth”.

“At that point, when we did [‘Slapback’], Geoff wasn’t even involved in the band; I hadn’t even got Geoff over at that time,” Iommi noted. “That is actually Ronnie [Dio] playing bass on that… And that was just in the lounge recorded on a cassette.”

The guitarist went on to explain that Slapback was something the group would routinely jam on. However, Iommi said “it [wasn’t] right for the album, so we didn’t put it into shape; we didn’t record it [properly] or anything”.

Earlier in the week, Sabbath bassist Geezer Butler also appeared as a guest on Trunk Nation. Also decrying the quality of Slapback, Butler called it “one of those songs that didn’t make the grade”. However, his recollection of the track differed from the version Iommi tells. Where the guitarist recalled Dio playing bass on the track, Butler insisted he was the one playing.

“That was one of the songs that we did before I left,” the rocker explained, referring to a brief period during the Heaven and Hell recordings in which he departed the band. “It’s probably the reason I did leave.”

Black Sabbath have released rare and unheard live versions of Heaven and Hell and The Mob Rules from the upcoming reissues of their two albums of the same name. These albums, along with 1992 hit Dehumanizer, were the only ones to feature the late Ronnie James Dio as Black Sabbath’s frontman.