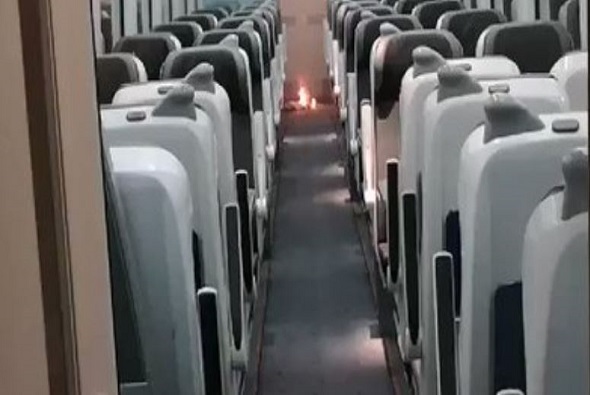 Horrified passengers on a packed Dublin bound train were left deeply concerned for their personal safety earlier this month.

On Thursday, 12th of December, people including young children onboard the 7pm service from Sligo to Dublin Connolly had to stop at Boyle in Co Roscommon.

That’s after a man set an area of a carriage on fire as well as threatening people and staff. It’s believed that the disturbing man was carrying bottles with him at the time.

It’s also understood that as the man was threatening people during the ordeal, the bottles he was carrying smashed in the train’s automatic doors.

To make things worse the man had seemingly picked up the broken glass in his hand while he was upsetting commuters.

Irish Rail reports the man also assaulted a passenger on the platform as he ran from the train. The man was later arrested by gardai who had rushed to the scene.

The terrifying incident led to 45-minute delays to the Irish Rail service, and the driver had to put out the fire on the train with the assistance of a passenger.

David Kenny was on board the train and trapped on the carriage where the man was carrying out this senseless act of vandalism and violence. Mr Kenny shared a clip of the fire near where he had been sitting.

I’m honestly shaken something seriously needs to be done to protect passengers on public trains. It’s unacceptable in today’s world not to have security on rail services. This man attempted to burn the train threatened myself and others attempted to assault. @IrishRail pic.twitter.com/n9ej8zC3wu

Mr Kenny said via the social media platform that it was unacceptable that there are no security onboard trains.

After fearing for his safety and experiencing significant trauma because of the incident the transport provider has offered an apology to Mr Kenny as well as the other passengers who had to endure the awful ordeal.

According to Dublin Live, a spokesman for Irish Rail said that: “On the 19.00 Sligo to Dublin Connolly last night, there was a serious incident in which an individual caused damage and disruption.”

“The individual threw objects in the carriage, threatened customers and staff, and lit a small fire in an area of one carriage – this was extinguished by the driver.

“As the train was approaching Boyle at this time, Gardai were alerted to attend at Boyle. Passengers were detrained while the small fire was extinguished – it is understood the individual assaulted at least one customer on the platform.”

“Gardai arrived, subdued and arrested the individual. The train proceeded with a 45 minute delay, with the carriage with the damage locked off.”

They continued: “We will provide Gardai with all information including CCTV images to assist in their criminal investigation. We are grateful to our driver for dealing with the matter swiftly and with the safety of passengers in mind, and Gardai for their quick response.

“We apologise to customers who experienced what was a frightening and upsetting incident.”

Love Was In The Air Last Night At Pearse Street Station

Check Out Who Topped The List For Best Irish Role Model...