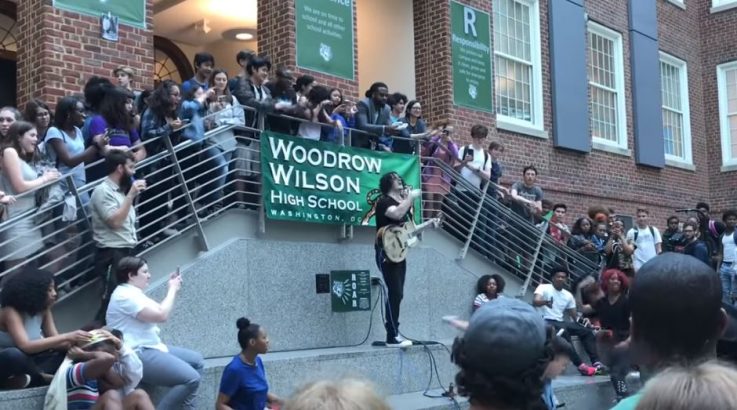 As reported in Nova’s Seriously Addictive Music News, Jack White gave an impromptu performance at a high school in Washington DC on Wednesday May 30th. You can check out footage of the rendition of Seven Nation Army and clips of the gig below.

According to Consequence of Sound, The prolific rocker performed at The Anthem venue in the US capital on Tuesday May 2 th. During his time off between shows, White went down to the city’s Woodrow Wilson High School, where he appeared with his guitar outside in the atrium area of the school.

Students were overjoyed to join with  the rock star on the steps, fist-pumping and chanting along to the unmistakable riffage of his White Striped classic ‘Seven Nation Army’. Check out the video of White’s School of Rock moment below.

WTOP reported that White played a 45-minute set for the kids during their lunch break, ‘They knew we have this big atrium space, and they thought that that might be an appropriate place for him to set up and do a pop-up show, said Principal Kimberly Martin.

John Lennon’s Doodle Of Himself As Hitler Sells For $54,000