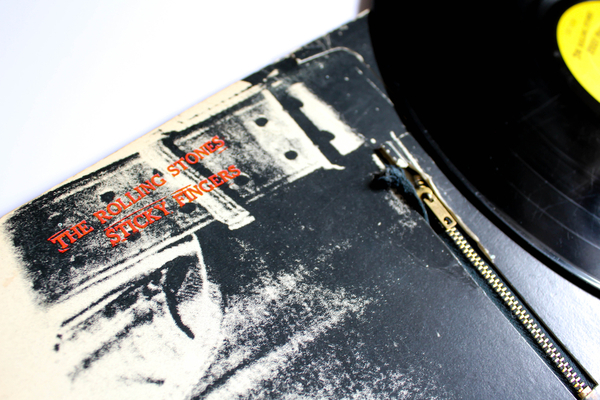 Although Rolling Stones’ 1971 album, Sticky Fingers is one of the most recognisable album covers out there, it almost never made the cut. In their new book, Stones singer, Mick Jagger discusses how one, simple design flaw very nearly derailed the release of this iconic album.

Friend of Mick Jagger, Andy Warhol created the artwork concept for the album’s cover following a request from the Stones singer. Speaking in the new book, The Rolling Stones: Unzipped, Jagger recalls giving the ‘pop art’ artist the title of the album only, “and he came back with this really innovative design”.

“I knew Andy really well. I gave him the title of the album and he came back with this really innovative design,” Jagger recalled. “Warhol’s idea included the close-up shot of a man’s groin in jeans, complete with working zipper. Behind it, the image of a man in white briefs underwear would be added. Even with this additional layer, the zipper proved problematic”.

Jagger said the cover art is “quite complicated”, as it has a lot of components; “the outside crotch shot and the inside underwear, which is quite sexy. The cover’s got an actual zip. The problem was shipping them. When we zipped up the cover, the weight of all the albums made a dent in the vinyl.”

Fans of vinyl records know all too well of what a little damage can do to a record, as the sound can be drastically altered permanently. Early pressings of Sticky Fingers became affected by the “dent” Jagger speaks of, which regularly caused ‘Side Two’ track, Sister Morphine to be affected. However, all was not lost as artwork designer, Craig Braun conjured up a swift solution.

“I got this idea that maybe, if the glue was dry enough, we could have the little old ladies at the end of the assembly line pull the zipper down far enough so that the round part would hit the centre disc label,” Jagger recalled in a 2015 New York Times article. “It worked, and it was even better to see the zipper pulled halfway down.”

Labelling it “an amazing solution,” Jagger admits the band originally ““thought we were f*****, basically”, before Braun’s alterations. However, the band had feared not, as the album went on to release in April of ’71, selling more than 3 million copies in the U.S. alone. Over half a century later, Sticky Fingers is still regarded as one of rock’s greatest albums, with its iconic artwork becoming VH1’s greatest album cover of all time in 2003.