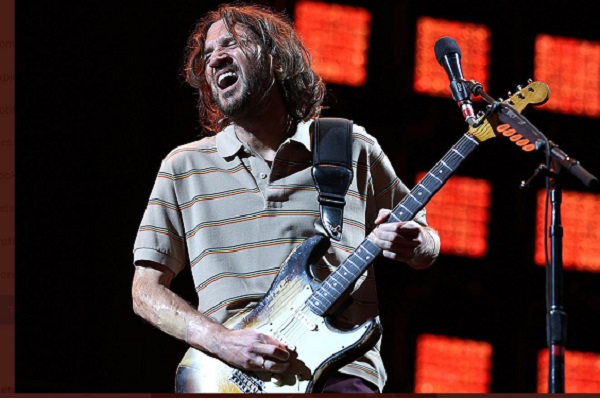 Frusciante who returned to the band in 2019 following a 10 year hiatus, confirmed this news via Bandcamp.

Regarding the album, Frusciante cited the need to “clear my head”, having released two albums with Red Hot Chili Peppers this year, in the form of ‘Unlimited Love’ and ‘Dream Canteen’.

Arriving on February 3, Frusciante who will also produce this album, also revealed that there will be two versions of it available, “, . I : and : I I . (“one” and “two.”) . I : is shorter, and contains a vinyl-only track, while : I I . is a longer, CD version of the record, containing “sounds that cannot be pressed on vinyl”.

“needed to clear my head”

Announcing the news of this album, John Frusciante released this statement.

“After a year and a half writing and recording rock music, I needed to clear my head”, he said.

“I listened to and made music where things generally happen gradually rather than suddenly. I would set up patches on a Monomachine or Analog Four and listen to them, hearing one sound morph into others, making changes to a patch only after having listened for quite a while, gradually adding elements, and finally manipulating the sounds on the fly. All tracks were recorded live to CD burner, with no overdubs, and executed on one or two machines”.

Elsewhere, Frusciante also spoke of how writing and touring with Red Hot Chili Peppers played a key role in his desire to create a solo album.

“I cannot overstate the role that being in my band played”, stated Frusciante.

He continued, “I had previously spent 12 years programming and engineering my own music, and then spent a year and a half making music where my role was basically to write songs and play guitar. When the band’s recording phase was completed, I needed to go back to my adopted language”.

“I had done enough with chords, rhythms, notes, defined sections, sharp transitions, etc.. What I needed was to create music from the ground up with nothing but sound, and have that music reflect ‘being’ rather than ‘doing’. It was a therapeutic way of re-balancing myself, before and during my band’s mixing process”.

Earlier this week, it emerged that Red Hot Chili Peppers’ ‘Californication’ music video had reached one billion YouTube views. More on this here.

Music And Entertainment World Reacts To Russian Invasion Of Ukraine