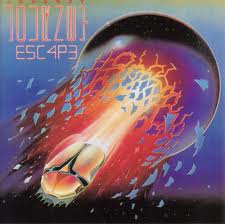 Escape, stylized as E5C4P3  is Journey’s seventh studio album, released on July 31, 1981. The album features four hit Billboard Hot 100 singles – “Don’t Stop Believin'” (#9), “Who’s Crying Now” (#4), “Still They Ride” (#19) and “Open Arms” (#2) – plus rock radio staples like “Stone in Love”, “Escape”, and “Mother, Father”. It was a massive success, being certified nine times platinum by the RIAA. The album is the band’s most successful studio album and is recognised as one of the greatest and most successful arena-oriented rock albums of the 1980s. It has sold over 12 million copies worldwide.

Escape was the band’s first album with keyboardist Jonathan Cain who replaced founding keyboardist Gregg Rolie after he left the band at the end of 1980. The album was co-produced by former Lynyrd Skynyrd soundman Kevin Elson and one-time Queen engineer Mike Stone, who also engineered the album.

An Atari 2600 game, Journey Escape, was made based on the album.

Mike DeGagne of Allmusic awarded Escape four-and-a-half stars out of five, writing, “The songs are timeless, and as a whole, they have a way of rekindling the innocence of youthful romance and the rebelliousness of growing up, built from heartfelt songwriting and sturdy musicianship”. Colin Larkin awarded the album four out of five stars in the 2002 edition of the Virgin Encyclopedia of Popular Music. In the 2004 edition of their album guide, Rolling Stone were less favourable, awarding the album two-and-a-half stars out of five, which was nonetheless an improvement from Dave Marsh’s one star rating in the 1983 edition of the publication.

In 1988, Kerrang! readers voted Escape the greatest Arena-oriented Rock album of all time. The following year, the magazine ranked Escape #32 in “The 100 Greatest Heavy Metal Albums of All Time”.A 2000 Virgin poll saw the album voted the 24th greatest Heavy Metal/Alternative Rock album of all time. In 2001, Classic Rock ranked the album #22 in “The 100 Greatest Rock Albums of All Time”. In 2006, the same publication recognized the importance of the album’s contribution to popular music in the 1980s by including it in their “The 200 Greatest Albums of the 80s” as one of the twenty greatest albums of 1981. Originally a progressive rock band, Journey experienced strong resentment from many music critics after they embraced the pop sensibilities of the 1980s with smash hits like “Don’t Stop Believin'” and “Open Arms”; Q magazine ranked Escape 15th in its “Records it’s OK to Love” in 2006.

All songs written and composed by Jonathan Cain, Steve Perry, and Neal Schon, except where noted.

You Can Listen To The Who’s ‘Who’s Next?’ In Full Tonight...