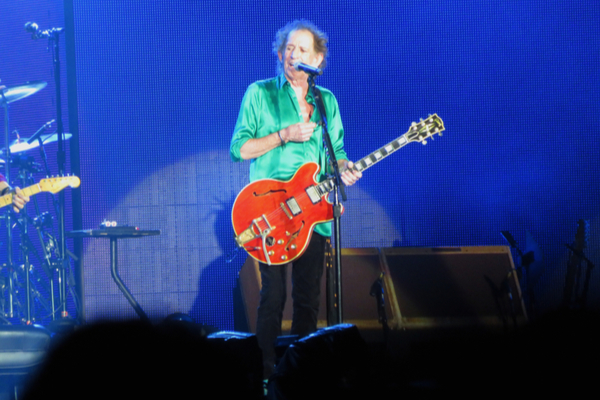 Keith Richards has confirmed details of a guitar-based NFT that will go under the hammer at a charity next month.

Richards has joined forces with the “green NFT platform” OneOf for the auction. This partnership will raise funds for Grammy’s music charity MusiCares.

This online auction will take place over Julien’s Auctions.

This also marks their first ever NFT sale. The charity auction will include a black Gibson ES-335 electric acoustic guitar which was also signed by Keith Richards himself. This will also include a hard guitar case.

Described as a “a digital version of the signed guitar”, this NFT features a four second clip of Richards signing the guitar at New York’s Germano Studios. The signature was a “seal of authenticity”.

The auction will conclude at the end of this month.

“We are honoured” – OneOf on Keith Richards

Adam Fell who is co-founder of OneOf had this to say.

“We are honoured to be the platform to mint the first-ever Keith Richards NFT”, he insisted.

“Keith is music royalty, and we applaud him and his team for championing eco-friendly blockchain technology that can empower musicians for generations to come”.

It was also confirmed this week that the UK Royal Mail were to mark 60 years since the Rolling Stones’ formation by releasing a special set of stamps.

The Royal Mail Director of Public Affairs and Policy David Gold also had this to say.

“Few bands in the history of rock have managed to carve out a career as rich and expansive as that of The Rolling Stones”, he also stated. “They have created some of modern music’s most iconic and inspirational albums, with ground-breaking live performances to match”.

The stamps will also be made available on general sale on January 20. More on this report from Nova here.