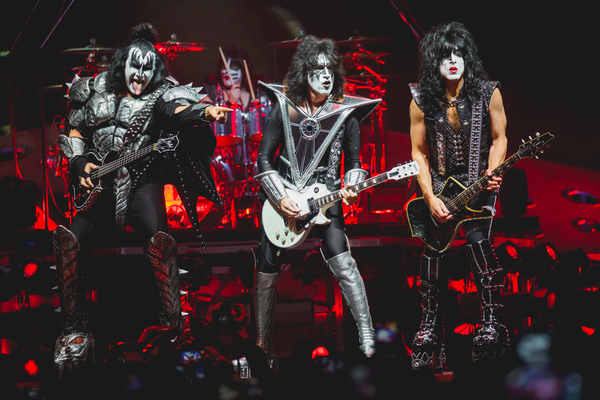 KISS’s Paul Stanley has expressed his interest in collaborating with Foo Fighters.

Stanley revealed his wish while being interviewed at the World Premiere in Hollywood of Foo Fighters’ upcoming horror-comedy movie Studio 666.

“Dave and I, we had children in the same school, so I’ve known Dave for a while,” he said. “I mean, look, what he’s done is phenomenal. The idea of going from being the drummer in such a pivotal band to becoming really arguably one of the biggest rock stars in the world? Pretty good.”

“At some point, I’m sure we’ll do something – we’ll make some noise together,” Stanley said of a possible collaboration. “That’s what makes music so fun, not knowing what’s coming tomorrow.”

Last December Stanley’s KISS bandmate Gene Simmons got to enjoy his own moment with Foo Fighters during a show in Las Vegas.

“Alright, we got a rock show now,” Grohl said after Simmons’ brief cameo. “Because Gene Simmons [is a] legendary bass player. I had posters of that motherfucker on my wall when I was a kid. Hold on, let me rephrase that. I still have posters of Gene Simmons on my fucking wall at home.”

“Backstage with the Foo Fighters right before they royally rocked the house last night in Vegas,” he wrote. “Fun stuff. And, I can’t say enough about their commitment and authenticity to the fans. Inspiring!”

Backstage with the ⁦@foofighters⁩ right before they royally rocked the house last night in Vegas. Fun stuff. And, I can’t say enough about their commitment and authenticity to the fans. Inspiring! pic.twitter.com/mo2PBRN9Up

Simmons is currently selling his Las Vegas mansion for an asking price of $13.5 million. He recently announced that he would gladly accept payment through cryptocurrency.

“I have been an outspoken proponent of cryptocurrency from the beginning,” he said. “It is the future of money, and it just makes sense to offer interested parties the option of using cryptocurrency to purchase the estate.”

Last week a surprise tribute was paid to KISS at the Winter Olympics.

British ice dancing duo Lilah Fear (22) and Lewis Gibson (27) came out onto the ice clad in black and silver outfits styled after KISS’s iconic garb. They then performed their routine to a medley of KISS classics.

The routine began with I Was Made For Loving You, segued into Forever, and climaxed with Rock and Roll All Nite.

It seems the judges weren’t KISS fans, as the duo could only finish in 10th place.