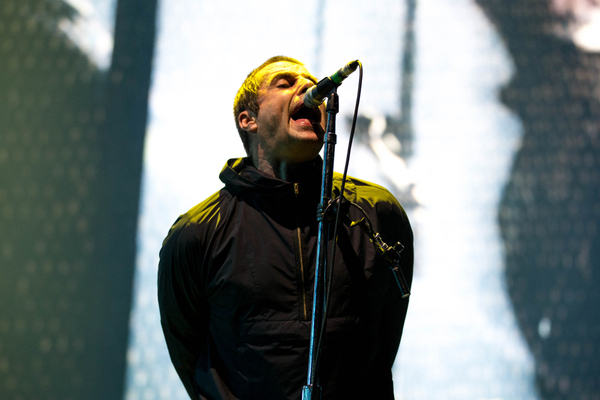 Over the weekend, Liam Gallagher revealed that he suffered injuries after he “fell out of a helicopter”. Despite this traumatic incident, he did assure fans that he was “all good”.

The former Oasis frontman has earlier closed the first day of the Isle of Wight Festival. The singer included a number of solo tracks, along with several Oasis classics.

Gallagher performed his solo hits “Wall Of Glass” and “Shockwave”, in between Oasis hits “Cigarettes and Alcohol” and “Rock And Roll Star”.

The encore then saw Gallagher perform tracks “Acquiesce”, “Live Forever” and “Roll With It”.

“You couldn’t write it”

“So check this out I fell out the helicopter last night you couldn’t (write) it”, Gallagher later tweeted.

While he was quick to assure fans that he was “all good”, Gallagher also joked,“Who said (Rock n Roll) is dead. Keith Moon eat your drum skin out. C’mon you know”.

He also shared a photo of a bottle of Estrella, writing, “What doesn’t kill ya makes ya. TUFF GOING”.

So check this out I fell out the helicopter last night you couldn’t rite it all good who said RnR is dead Keith moon eat your drum skin out C’mon you know LG x pic.twitter.com/MSVR1C6EXk

Gallagher to use photo of injuries for new album cover?

Liam Gallagher even cheekily joked that he might use the photograph of his facial injuries for his next album cover.

He wrote, “Got the cover shot for Nxt album c’mon you nose LG x”.

Got the cover shot for Nxt album c’mon you nose LG x pic.twitter.com/0QIXV5djxk

Liam Gallagher had already revealed that he was working on two new solo albums back in August. More on that here.

Gallagher had tweeted earlier that day, “Life is precious let’s make it happen”.

“I’m not messing about we only get to do it once I’m coming in a mess I’m going out in style c’mon you know”, he added.

Gallagher also heaped the praise on the fans who saw him at the festival, “Isle of (Wight) you were bonkers I love you stay safe and remember it’s not where your from it’s how many coronas you can have while eating mushy peas LG x”.

Check out Liam Gallagher rocking it at the Isle of Wight here.

Meanwhile, director of the upcoming film Oasis Live At Knebworth has said he is convinced that the band will get back together one day.

“Yeah. I’d love to think so. It’d be lovely. Oh God it’d be great wouldn’t it?”, Jake Scott said when asked on a possible Oasis reunion.

“There’s so much studio manipulation in music now. Just a solid rock n roll band would be an amazing thing to see again”.

Oasis split up in 2009, with brothers Liam and Noel at loggerheads since then.

Recently, Noel Gallagher had said that Oasis began to attract this “yobbish element” towards the end of their career. More on that here.

The Offspring Are Safe After Their Vehicle Catches Fire On Route...