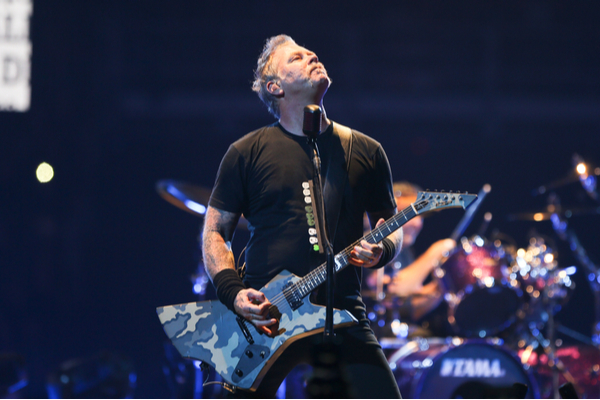 Metallica frontman James Hetfield has revealed that the band have written over 10 new songs whilst in quarantine during the pandemic. Some songs were even written over a series of Zoom calls.

This revelation would appear to tie in with what Elton John revealed in March. The legendary singer said that he had been working on new material with Metallica during lockdown. More on that here.

James Hetfield was speaking on the Fierce Life, a podcast made by gun manufacturer Fierce Firearms, focusing on Hetfield’s keen hobby of hunting.

“Because of COVID, just sitting at home and getting a little bit antsy and just feeling creative at the same time and wanting to get together, I started doing a weekly Zoom with those guys just to check in”, Hetfield told the podcast.

“And then I just told them one time, ‘Hey, I’m gonna write something. I’m just gonna play something and send it to you guys. You do whatever you want with it and see what happens and layer on to it”, Hetfield continued.

“So that’s how we did a version of ‘Blackened’ (for) 2020. I just basically played something – they hadn’t heard it before, they played on it” (quotes transcribed by Metal Hammer)”, he also added.

Hetfield explained to the podcast how he, Kirk Hammett and Lars Ulrich would get together via Zoom and work on this new material.

“We started experimenting with writing on Zoom. (Drummer) Lars (Ulrich) and I would get together, or (guitarist) Kirk (Hammett) and Lars, and we would get little bits of time here and there writing”, he said.

“It was difficult because of the delay in the sound, so we couldn’t actually play together, but we would play to a click track and watch each other play”.

“Lars had an assistant running his computer from LA – he’s up here in San Francisco – and we were playing together, and it was pretty bizarre. We started writing. We got about, I don’t know, over 10 songs going that way. And then we finally got together. There’s only so much you can do on Zoom”.

Foos & Rage Against The Machine To Headline Boston Calling 2022