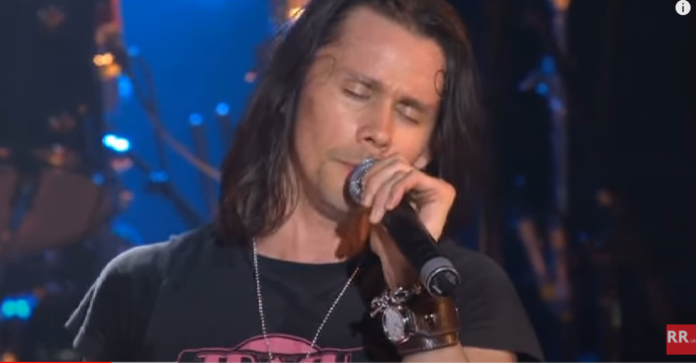 Slash and The Conspirator’s Myles Kennedy spoke about how his dream came true and he sat beside Led Zeppelin with a view to possibly replacing Robert Plant.

Following the band’s reunion show in 2007, Jimmy Page, John Paul Jones along with drummer Jason Bonham invited Kennedy to write music with them. He was also invited to rehearse with the band for two sessions.

Kennedy did also say that the rehearsal would not have been under the Led Zeppelin banner.

Kennedy’s other band Alter Bridge were coming off the back of their second album “Blackbird”. Led Zeppelin on the other hand were in a interesting phase. Their 2007 reunion show had sparked an appetite for a reunion. The only problem was that Robert Plant had reportedly torn up the contract for a deal worth up to £500 million.

This led to Jimmy Page turning to Kennedy.

“I hadn’t talked to him in years (Jason Bonham), since we did the Rock Star movie together. He called me when we were on tour and said, ‘Jimmy Page, John Paul Jones and I are in London jamming, and we were wondering if you’d be up for coming in?’”, explained Kennedy.

Despite thinking they were joking, on 13 June 2012, Kennedy found himself rehearsing with the group. “I was completely freaking out, as you would”, he remarked.

A few classic hits like Kashmir and No Quarter were jammed, along with some new sketches, before Kennedy announced he was getting a cab to to the train station, as he had a show with Alter Bridge in Birmingham the following day.

The band rehearsed with Kennedy a few months later for four days, but the singer knew Page and co were also trying other singers.

He said, “They were just trying to figure out what was going on with all the Led Zeppelin stuff, and trying to see if the whole situation was appropriate. I heard back from their managers a few months later, and they’d decided not to do it”.

Speaking to Rollingstone in 2012, John Paul Jones and Jimmy Page also tried the late Chris Cornell and Steven Tyler for the band.

“Various people thought we should go on tour. I thought we needed a good, credible album, not do something that sounded like we were trying to milk the (reunion)”, Page said in 2012.

While we can only really speculate as to what may have happened if Bonham, Page and Jones had got together with Kennedy for a reunion tour for the band. As far as Kennedy was concerned, just to rehearse with them was enough.

He said, “Man, it would have been amazing”.

Adding, “But just to have been in the same room as those guys was something I’d never even dreamed of”.

Last month, Kennedy released a new track for his upcoming solo album. Check it out here.