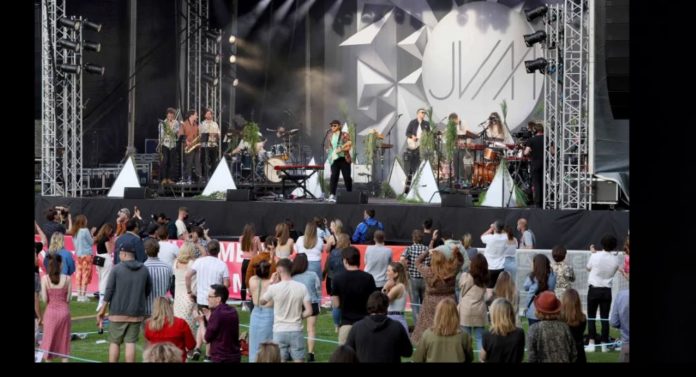 We can now confirm that over one million people have been fully vaccinated against Covid-19 in Ireland. This also comes as Ireland welcomed back live music to the country as James Vincent McMorrow performed live in the first of a series of pilot events.

“We hope by the end of the day that one million people will be fully vaccinated which I think is a significant milestone”, Taoiseach Micheál Martin said on Wednesday.

“So we have to drive forward the vaccination programme now throughout June and July to protect our community and protect our society in relation to not just the virus but any variants that may emerge over time”.

This also comes after it was reported that St James Hospital marked the first day without a Covid patient since the pandemic began.

“It is a fantastic day today with no more Covid patients in St James’”, Dr Cliona Ni Cheallaigh said. “I think we’ve all worked so hard to get to this point, both the staff in the hospital and the people of Ireland”.

HSE boss Paul Reid called this milestone “quite remarkable”, given that there was over 100 patients treated in St James Hospital in January.

Target of 70% vaccinated by July

The Government have also set a new target that 70% of the population will be fully vaccinated by the end of July.

“June is going to be a very good month again”, the Taoiseach said. “The last two weeks of June is looking good in terms of security of Pfizer BioNTech in particular”.

“The AstraZeneca visibility is also improving”, he also added.

“The two big vaccines at the moment — Pfizer is the workhorse, Moderna is doing fine and fulfilling its obligation — and now AstraZeneca coming in a bit stronger”.

“I think the target we are aiming for is by the end of July and this is a target dependent on supply — is that we will have 70 per cent fully vaccinated”.

Music to the ears

The sight and sound of James Vincent McMorrow singing live to 500 people in Dublin’s Iveagh Gardens would have been music to anybody’s ears.

The singer performed in front of a socially distant crowd in the first of a series of pilot events. It is hoped that this will allow for a return to concerts soon.

McMorrow was also supported by Sorcha Richardson in a show which was streamed online for free.

The show was also organised by the National Concert Hall. Their boss Robert Read also explained the various safety measures put in place.

“We are having staggered entry and departure times”, he said.

He also added, “we have a lot of our front-of-house team on site to ensure that people are observing physical distancing”.

“We have pods marked out on the lawn”, he also added. “There is about 150-180 of those so that people can be contained within a small perimeter”.

Another pilot concert featuring Christy Moore sold out in four minutes. 200 tickets were available. The show is to also take place in Killarney on June 26.