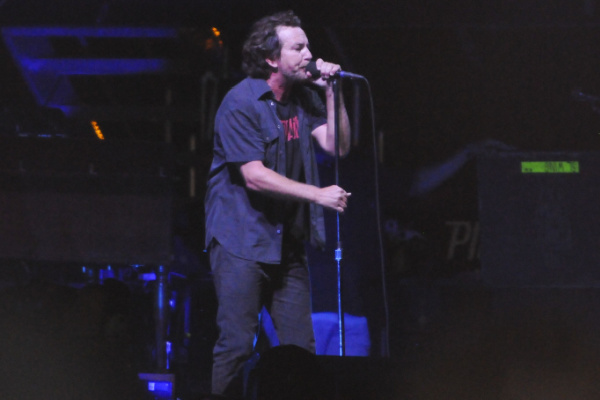 On the 21st anniversary of one of the greatest human tragedies of all time, Pearl Jam paid tribute to the 9/11 victims during last night’s show in Madison Square Garden.

This show was part of the band’s ongoing ‘Gigaton’ Tour.

On the 21sth anniversary of the tragedy, Pearl Jam frontman Eddie Vedder paid homage to several first responders from the tragedy who attended the show.

Vedder told the audience between songs, a story about a man named Mike who had told him that he was leaving the City on 9/11 due to traumatic memories of the event, but this year he “thought it would be a good idea to be here tonight with you”.

“That’s the part we cannot forget”

Footage of this Pearl Jam tribute which you can see below, also shows Eddie Vedder telling the audience that the United States became a more united as a society following 9/11.

“There was a time we supported each other”, Vedder said. “That’s the part we cannot forget. Let those lessons be remembered as our solidarity to come together and keep this country straight”.

Vedder continued, “This is the 37th time this band has played in New York City. I think we’ve only played Seattle 50. Here’s the thing – I don’t remember half of those f*****g Seattle shows. I just don’t. But I feel like we remember ever Manhattan show”.

“This potentially has the chance to be the most memorable of them all. We are quite honoured to be spending this important date with you”.

See the footage of Pearl Jam in action here.

Earlier in the tour, Pearl Jam performed a concert in San Diego, where they also paid tribute to the late Foo Fighters’ drummer Taylor Hawkins on stage. Check that report from Nova here.

Last week, Pearl Jam also paid tribute to the late Queen Elizabeth II, by performing a live rendition of ‘Her Majesty’ during a show in Toronto. See that cover here.