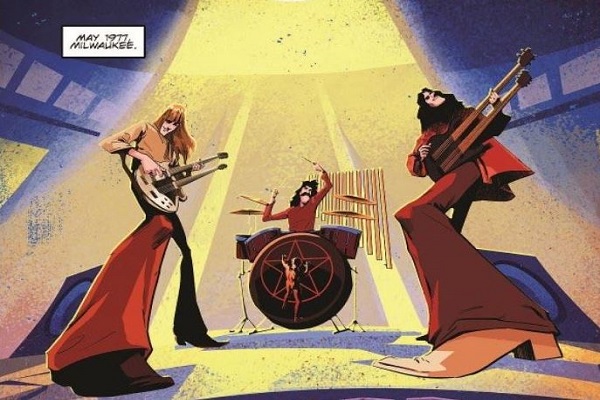 A graphic novel that charts the creation of Rush’s epic A Farewell to Kings record is set for release on Sept. 10th. You can check out pages of the illustrations below.

Created by Fantoons animation studio, the 144-page The Making of A Farewell to Kings was drafted under supervision by Rush guitarist Alex Lifeson as well as producer of the record, Terry Brown, who also penned the book’s forward.

Another release, a 70-page colouring book replete ” with gorgeous Rush artwork and references from Moving Pictures to Clockwork Angels” is scheduled to arrive in July.

Dropped in 1977, Rush’s fifth studio album, A Farewell to Kings witnessed the prog rockers starting to experiment with synthesizers. It eventually helped gain the band their first gold album in the States.

According to UCR, the record also acted as a link between their early ’70s hard-rock style and the more modern sounding approach of their later work. The single “Closer to the Heart,” from the album became the band’s U.S. radio hit.

If you wish to bag a copy, can pre-order The Making of A Farewell to Kings from Rush’s official website here.

Morrissey Storms Off Stage After Fan Insults Him

Kasabian to play 4 gigs in Ireland this May