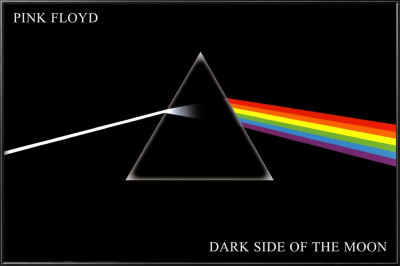 The Dark Side of the Moon is the eighth studio album by the band Pink Floyd. It was released on the 1st of March 1973. It was produced by the band themselves.The album was recorded at Abbey Road Studios, in two sessions, between May 1972 and January 1973.  It is built on ideas explored in the band’s earlier recordings and live shows, but lacks the extended instrumental excursions that characterised their work following the departure in 1968 of founder member, principal composer, and lyricist, Syd Barrett. The Dark Side of the Moon ’​s themes include conflict, greed, the passage of time, and mental illness, the latter partly inspired by Barrett’s deteriorating mental state.

Developed during live performances, an early version of the suite was premiered several months before studio recording began; new material was recorded in two sessions in 1972 and 1973 at Abbey Road Studios in London. The album’s iconic sleeve, designed by Storm Thorgerson, features a prism that represents the band’s stage lighting, the record’s lyrical themes, and keyboardist Richard Wright’s request for a “simple and bold” design. The band members spent three minutes deciding on the front cover. One of the rejected designs involved a then-popular Marvel comic book superhero, the silver surfer! For a while the album had a different working title. It was to be named Eclipse (A Piece for Assorted Lunatics] the reason for this being there was another album out at the time called Dark Side of the Moon.

The Dark Side of the Moon was an immediate success; it topped the Billboard Top LPs & Tapes chart for one week and remained in the charts for 741 weeks from 1973 to 1988. With an estimated 50 million copies sold, it is Pink Floyd’s most commercially successful album and one of the best-selling albums worldwide and is in the top 25 of a list of best-selling albums in the United States.[47][88] Although it held the number one spot in the US for only a week, it remained in the Billboard album chart for 741 weeks. It has twice been remastered and re-released, and has been covered in its entirety by several other acts. It produced two singles, “Money” and “Time”. The Dark Side of the Moon is one of Pink Floyd’s most popular albums among fans and critics, and is frequently ranked as one of the greatest albums of all time.

Each side of the album is a continuous piece of music. All the lyrics on the album are written by Roger Waters.  The five tracks on each side reflect various stages of human life, beginning and ending with a heartbeat, exploring the nature of the human experience, and (according to Waters) “empathy”. Dark Side of the Rainbow and Dark Side of Oz are two names commonly used in reference to rumours (circulated on the Internet since at least 1994) that The Dark Side of the Moon was written as a soundtrack for the 1939 film The Wizard of Oz.

Led Zeppelin – Houses of The Holy