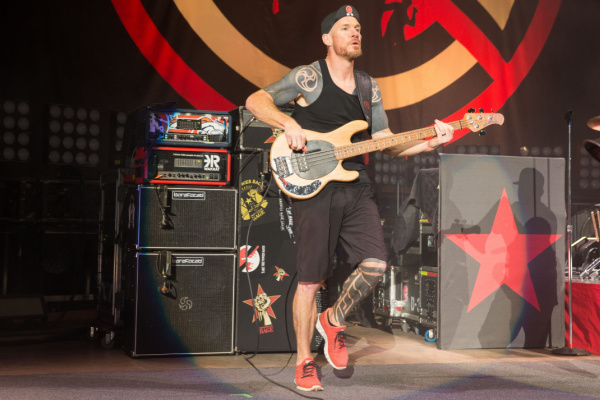 Rage Against The Machine bassist Tim Commerford has revealed that he has prostate cancer.

Commerford announced this news, adding that he got his prostate removed just before the band embarked on their tour.

The bassist shed further light on his diagnosis in a recent interview.

Rage Against The Machine were previously forced to cancel their UK and European, after their frontman Zack de la Rocha pulled out on medical grounds.

Sharing more details regarding his diagnosis, Commerford had the following to say.

“I went to get life insurance but my PSA numbers were up. I couldn’t get it”, he explained.

“They wouldn’t insure me. At first, the number was very low – like one-point-something. I watched it over the course of a year and a half, and it kept elevating further. Eventually, they did a biopsy and found out I had cancer, so they took my prostate out”.

“I had been thinking, well, because they’re watching it and let it get to this point, maybe it’s not that big of a deal. I blame myself. I should have said, ‘My numbers are elevated and what does that really mean?’ I should have taken it more seriously”.

Reflecting on his diagnosed, Commerford insisted that he still has goals regarding what he is keen to achieve as a musician.

“Now I’m in the situation that I’m in, which is, hold your breath for six months. It’s not a good one and not one that I’m happy about. I’m just trying to grab ahold of the reins. It’s gonna be a long journey, I hope”, he continued.

“That was brutal” – Commerford

Having been subsequently informed that he was not going to be ready to join the rest of the band on tour, Commerford described this as “brutal”.

“That was brutal. I would be on stage looking at my amp in tears. Then you just kind of turn around and suck it up”, stated Commerford.

“Because of Zack [de la Rocha]’s injury, we had planned these little video interstitials that came in between blocks of songs. We were meant to go on stage, play some songs, go off stage, and on to the interstitials for a few minutes. It was seamless”.

“Then he got hurt and we couldn’t leave the stage. So during the interstitials, we’re just sitting there. That was surreal. I would sometimes sit down and try to not think about certain things. It was weird. I kept it to myself throughout the touring we did and it was brutal”.