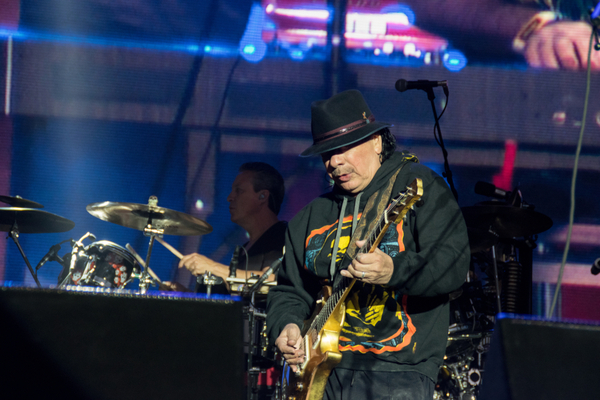 Santana have just released their latest single Move. It is from their latest album “Blessings And Miracles”. Check out the video for the track below.

The album includes a reunion with Matchbox Twenty singer Rob Thomas. The pair collaborated on the Grammy-winning track from 1993, Smooth.

The track was used in the rom-com Love Actually.

Move also features American indie-folk band American Authors. The band are best known for their track “The Best Day Of My Life”, released in 2013. Their frontman Zac Barnett takes lead vocals on the track’s second verse, after Rob Thomas takes the opening verse.

Santana also continues to produce his unique guitar solos throughout the track.

Announcing the new album in a press release, Carlos Santana also had this to say.

He also added, “But, of course, I’m honored to work with such incredible artists. I’m a surfer riding those waves that become songs by different artists, creators and architects. I’m very fortunate that I have the opportunity to do that. It’s a gift I don’t take for granted”.

Santana also explained as to how the the Rob Thomas collaboration came about.

“‘Move’ came about was very much like how ‘Smooth’ happened”, he said. “It was like divine intelligence behind the scenes, and I just knew I had to record it with Rob”.

He continued, “The song is about awakening your molecules. Ignite and activate yourself – you know, move. When Rob and I work together, we have a sound that’s splendiferous”.

Santana will also resume their multiyear residency at the Mandalaya Bay Resort and Casino in Las Vegas on August 25. This residency runs up to September 4.

The band will also begin their Blessings and Miracles Tour. Beginning on September 11, the band will tour in eastern and southern states. They will start in Atlantic City and finish on October 2 in Oklahoma.

Check out the tracklist for Blessings and Miracles below.