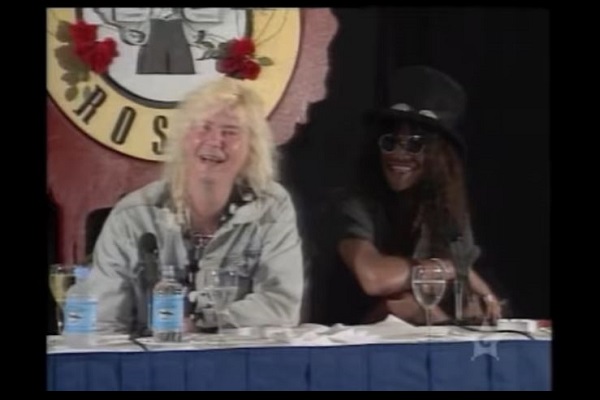 Although some rock bands have generally been considered to be complete bad a****, some have shown their playful side to the cameras. Once considered one of the “most dangerous bands in the world,” Guns ‘N’ Roses highlighted their sense of humour in a 1993 interview with Slash & McKagan.

Resurfacing online almost 30 years later, the clip presents a very playful image of the pair while touring Australia – in support of the Use Your Illusion albums. Slash and Duff McKagan were interviewed by Norman Gunston – satirical TV host portrayed by Australian actor Garry McDonald. As Gunston rises to ask them questions, Slash can be heard saying “Oh, we heard about you!”

“Why do you wear bananas on your head?” Gunston initially questioned. “Sorry, uh — why do you wear bandanas on your head?” Replying that neither of them wear bandanas, Slash discovered Gunston intended to say Axl Rose, or “Hubcap” as the satirical host referred. “Oh, it’s gonna be one of those things, right” Slash grinned, “I just woke up man, I’m not ready for you.”

Always the entertainers of the group, Slash and McKagan seem to have great craic during interviews and award speeches. At the American Music Awards in 1990, GN’R were given two awards for Favourite Heavy Metal Artist and Heavy Metal/Hard Rock Album.

Staggering to the stage, the dynamic duo made their way up to the podium to give an acceptance speech. Please beware as parts of this video does include some swearing from the G’N’R guitarist, although Slash does say “oopses” for his error.

Watch the humorous interview below as they struggle to make it through the rest of Gunston’s questions. Everyone is thankful for this segment coming back into rotation and giving some the chance to relive this somewhat foreign time.

This weekend on Nova we will mark the birthdays of two members of one of the best rock bands of all time, as Guns N’Roses pair Duff McKagan and Axl Rose turn 58 and 60 respectively.

Last night, our very own Marty Miller from [email protected] had a chat with Guns N’Roses bassist McKagan, where he spoke about along with many things, looking at a property in Ireland as a European base! That would be so cool, wouldn’t it?

In a little extract from the interview, McKagan revealed that he had “looked at places in Ireland”.