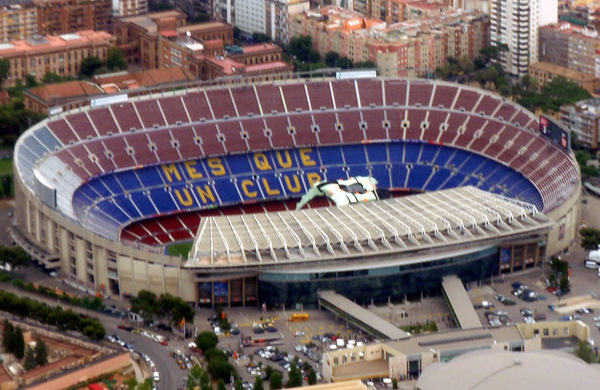 Spotify’s sponsorship deal is said to be for three seasons beginning with the 2022-23 season. Along with the renaming of the stadium, the Spotify logo will be emblazoned across the chests of the team’s famous jersey and training gear. The deal would apply to both the men’s and women’s teams.

Barcelona had long been known for refusing sponsorship until they signed a deal with Unicef in 2006. In 2011 they inked a controversial deal with Qatar Foundation that drew criticism from human rights groups. In 2017 they switched to a €55 million a year deal with video on demand service Rakuten.

The club had recently been linked with sponsorship deals with cryptocurrency companies VeganNation and Polkadot.

The news of Spotify’s pending deal coincides with the announcement that Barcelona’s chief executive Ferran Reverter has resigned after just seven months in the role. The club has listed “personal family reasons” as being behind Reverter’s resignation but Catalan media sources have suggested he had a strained working relationship with Barcelona president Juan Laporta. Reverter is believed to have worked on the deals with the cryptocurrency outfits, only to find opposition from the club’s board members.

In a statement, Barcelona thanked Reverter for “targets met,” including “restructuring of the debt, the approval by the fans of Espai Barça, the reduction of the salary mass, and agreements with new sponsors.”

It could be another controversial sponsorship deal for Barcelona, with Spotify currently attracting much negative press over an ongoing row around its hosting of the Joe Rogan Experience podcast.

Accusing Spotify of helping to spread misinformation around the pandemic, Young offered the streaming service an ultimatum of either removing his music or Rogan’s podcast.

Spotify subsequently announced that they would add content warnings to podcast episodes that could be interpreted as spreading misinformation, while Rogan said he would strive to be more balanced in his choice of guests on such issues.

The streaming service has since removed 70 episodes of Rogan’s podcast after it was highlighted he has used the n-word on a regular basis in the past.

In a statement, Young advised Spotify employees to “get out of that place before it eats up your soul.“