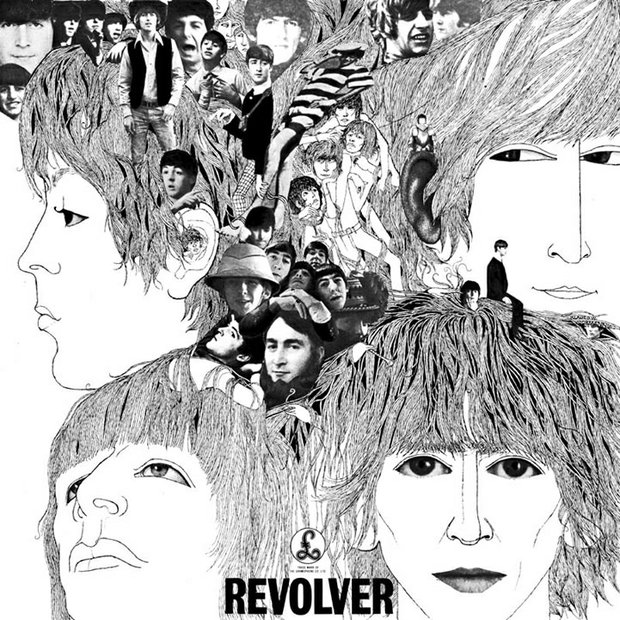 Revolver is the seventh studio album by English rock band the Beatles, released on 5 August 1966 on the Parlophone label and produced by George Martin. Many of the tracks on Revolver feature an electric guitar-rock sound that contrasts with their previous LP, the folk rock inspired Rubber Soul (1965). In Britain, the fourteen tracks from Revolver were released to radio stations throughout July 1966, “building anticipation for what would clearly be a radical new phase in the group’s recording career”.

It reached number one on both the British chart and American chart and stayed at the top spot for seven weeks and six weeks, respectively. The album was remastered 9 September 2009 for the first time since its 1987 digital compact disc release. Placed at number 1 in the All-Time Top 1000 Albums and number 3 in the Rolling Stone magazine’s list of the 500 greatest albums of all time, the album is often regarded as one of the greatest achievements in music history and one of the Beatles’ greatest studio achievements.

The cover illustration was created by German-born bassist and artist Klaus Voormann, one of the Beatles’ oldest friends from their days at the Star Club in Hamburg. Voormann’s illustration, part line drawing and part collage, included photographs by Robert Whitaker, who also took the back cover photographs and many other images of the group between 1964 and 1966, such as the infamous “butcher cover” for Yesterday and Today. Voormann’s own photo as well as his name (Klaus O. W. Voormann) is worked into Harrison’s hair on the right-hand side of the cover. In the Revolver cover appearing in his artwork for Anthology 3, he replaced this image with a more recent photo. Harrison’s Revolver image was seen again on his single release of “When We Was Fab” along with an updated version of the same image.

The title “Revolver”, like “Rubber Soul” before it, is a pun, referring both to a kind of handgun as well as the “revolving” motion of the record as it is played on a turntable. The Beatles had a difficult time coming up with this title. According to Barry Miles in his book Paul McCartney: Many Years from Now, the title that the four had originally wanted was Abracadabra, until they discovered that another band had already used it. After that, opinion split: Lennon wanted to call it Four Sides of the Eternal Triangle and Starr jokingly suggested After Geography, playing on The Rolling Stones’ recently released Aftermath LP. Other suggestions included Magic Circles, Beatles on Safari, Pendulum, and, finally, Revolver, whose wordplay was the one that all four agreed upon. The title was chosen while the band were on tour in Japan in June–July 1966. Due to security measures, they spent much of their time in their Tokyo Hilton hotel room; the name Revolver was selected as all four collaborated on a large psychedelic painting.

The Beatles’ tour of Asia (including Japan, where the Revolver album name was selected) did not feature any songs from that album, and neither did the subsequent last tour (U.S., that August). This was a further indication of how far their studio recordings had diverged from what they were still playing live.

In a 1967 article for Esquire, music journalist Robert Christgau called Revolver “twice as good and four times as startling as Rubber Soul, with sound effects, Oriental drones, jazz bands, transcendentalist lyrics, all kinds of rhythmic and harmonic surprises, and a filter that made John Lennon sound like God singing through a foghorn.”

In 1997, it was named the third greatest album of all time in a Music of the Millennium poll conducted in the United Kingdom by HMV Group, Channel 4, The Guardian and Classic FM.

In 2001, the TV network VH1 named it the number 1 greatest album of all time, a position it also achieved in the Virgin All Time Top 1,000 Albums.

In 2002, the readers of Rolling Stone ranked the album the greatest of all time.

In 2006, Guitar World readers chose it as the 10th best guitar album of all time.

In 2007, a PopMatters review described the album’s content – “the individual members of the greatest band in the history of pop music peaking at the exact same time”.

In 2010, Revolver was named as the best pop album of all time by the official newspaper of the Holy See, L’Osservatore Romano.

In 2012, Revolver was voted 3rd on Rolling Stone magazine’s list of the “500 Greatest Albums of All Time”. It placed behind only the Beatles’ own Sgt. Pepper’s Lonely Hearts Club Band and The Beach Boys’ Pet Sounds.

All songs written and composed by Lennon–McCartney, except where noted.

You Can Listen To Supertramp’s ‘Breakfast In America’ From Midnight Tonight...