Home Classic Albums The Who – Who Are You 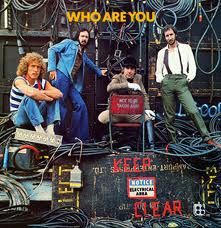 Who Are You is the eighth studio album by The Who, released on 18 August 1978 through Polydor Records in the United Kingdom and MCA Records in the United States. It peaked at number 2 on the US charts and number 6 on the UK charts. It is The Who’s last album with Keith Moon as the drummer; Moon died twenty days after the release of this album.

In 1996, the album was re-released in remixed form. Some of the elements from the original mixes were eliminated, including on the songs “Had Enough”, “905” and “Guitar and Pen”. However, “Trick of the Light” was restored to its full length at 4:45

Who Are You was put out at a time when the two major camps of rock, progressive rock and punk rock, were conflicting due to their antipodal styles. Pete Townshend’s compositions were written as an attempt to bring the two styles together. The album showcases some of the most complicated song structures Townshend had ever composed, with multiple layers of synthesiser and strings. Many of the songs also represented another attempt by Townshend to complete his long-contemplated Lifehouse project. Like Who’s Next, many of whose songs were also inspired by Lifehouse, many tracks on Who Are You feature prominent synthesiser parts and lyrics about songwriting and music as a metaphor for life.

There was a three-year hiatus between Who Are You and The Who’s previous album, The Who by Numbers. The band was drifting apart during this period, due to the band members working on various solo projects, Moon sinking deeper into alcohol and drug abuse. Moon’s health was especially an object of concern, as he only managed to come in during the last few weeks of recording and was unable to play in 6/8 time on the track “Music Must Change”, so drums were removed completely from the track and only a few cymbal crashes were added. Moon died just under a month after its release, and on the cover, he is shown sitting in a chair ironically labelled “Not to be taken away”. Moon had insisted on sitting in the chair with the back to the camera so as to hide his distended stomach, the result of his alcoholism.

The album was a commercial success, going 2× platinum in the US and Canada, Gold in UK, and peaking at number 2 on the Billboard Pop Albums chart. The soundtrack to Grease prevented Who Are You from achieving number 1 status in the US. The success of Who Are You generated excitement at the prospect of a new Who tour for the album. However, the album is surrounded by tragedy for Who fans due to Moon’s death shortly after the album’s release. The songs on the album were later performed on tour in 1979 when The Who were joined by new drummer Kenney Jones and keyboardist John Bundrick. Bundrick had been invited to play on the album, but broke his arm falling out of a taxi at the studio door and was unable to participate.

“Who Are You” was the first of the album’s songs to have a live performance, its first dating to a concert from the band’s 1976 tour at the Maple Leaf Gardens in Toronto, ON, albeit in a very raw and abbreviated version extremely different from the finished product. Another early and abbreviated live performance with Moon can be found on the DVD The Who at Kilburn: 1977.It is currently being played as part of the encore for the Who’s 2012 “Quadrophenia and More” tour.

All songs written by Pete Townshend, unless otherwise noted.