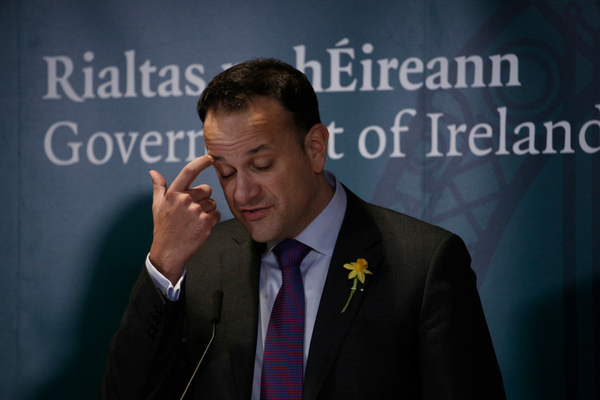 This week, the Central Statistics Office (CSO) revealed more than three quarters of renters who share accommodation feel they will never own a home. Mr Ó Broin bluntly told the Dáil that the statistics made for “grim reading”, as he accused Varadkar of leading a party of “privilege” and “rising housing costs”.

“These are the casualties of 10 years of Fine Gael’s housing policy,” Mr Ó Broin added. “Tánaiste, you’ve sat at the Cabinet table for those 10 years. These stories and the hardships are your legacy. In 2011 when you joined the Cabinet, the average price of a new home in Dublin was €318,000. Today, it is €503,000, half a million euros.”

Ó Broin reminded Varadkar that house prices have increased by 88% across the State, and 95% in Dublin. The Sinn Féin TD pointed out that this has occurred during Fine Gael’s time in office and repeated, “That, Tánaiste, is your legacy”.

Ó Broin added that Varadkar was elected leader of Fine Gael as he claimed to want “to represent those who get up early in the morning to go to work. However, he claims “big developers and big landlords” are the only people he has witnessed Fine Gael’s government are representing. He believes they have been “throwing around sweetheart deals and sweetheart land deals like confetti”, as it has become “increasingly clear that Fine Gael is not the party of hard-working people. It is a party of privilege, and a party of ever rising housing costs.”

Mr Varadkar defended his party’s stance on housing, although he added that he wanted to increase the housing budget. He claimed, “because of policies and decisions made by my party” and others gone by, that 65% of people in Ireland own their own home through policies introduced by his party. In a current population of 4,991855, the Tánaiste cited the Help to Buy programme, “which has helped tens of thousands of people to get a deposit to buy a home, something opposed by Sinn Féin”.

“I know that’s not a reality for hundreds of thousands of people in the State, for whom homeownership is a dream, a distant possibility, and that has to change”, Varadkar declared. The Tánaiste believes the main solution to the housing crisis is to have a bigger supply of housing of all forms. He revealed the housing budget and the budget for social housing is “under consideration at the moment”. Varadkar added he wants to increase the housing budget “as much as possible”, although there are other demands.

Last week, the Tánaiste announced that Ireland needs 40,000 homes built per annum, and a target of 70% homeownership by the end of the decade has been set. The Fine Gael leader also said he wanted the legacy of the pandemic to be “better pay, terms and conditions for all workers”. Varadkar added that the €4bn in additional spending given to the health service to fight COVID-19 “should be retained”.

Minister For Health Stephen Donnelly In Vaccinations Blunder As He Gives...