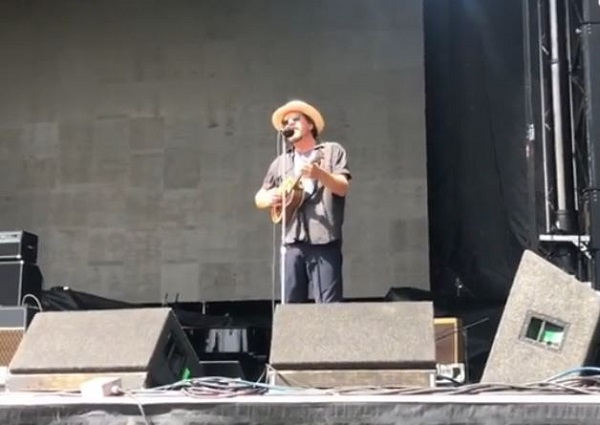 Pearl Jam frontman Eddie Vedder is going to headline the Ohana festival tonight. The effervescent lead singer made a surprise appearance on Friday for an intimate crowd to perform a rendition of The Beatles classic “Here Comes The Sun.” You can check it out below.

Vedder played the cover shortly after the first fans were let in, so the audience was very small Rustneversleeps posted on the PearlJam.com forums, “He’ll be dippin in all weekend. And theres maybe 25-50 people around.”. Vedder’s only other upcoming 2018 show is scheduled for next month.

You know it’s going to be a spectacular #Saturday when you start the morning watching #EddieVedder cover #TheBeatles. 🌼 Seeing you perform live has been on my bucket list for as long as I can remember, EV. Some day soon, Ed. Some day soon. 💗 #HereComesTheSun • #OhanaFest • #ukulele Clip CTO: @onetribefitness 🌷

Meanwhile, in a heartwarming story…Vedder is well known for his kind acts for children enduring hard times. A 13-year old Pearl Jam fan named Roarke overcame a battle with brain cancer recently. HIs dream came true when he jammed with Eddie Vedder after an online fan campaign made a meeting happen.

According to Alt Nation, this Summer, Andrew Long tweeted, “My guitar student, Roarke, beat brain cancer a few months ago. Him and his family have been through Hell and back this year. He loves Pearl Jam and wants to meet them at Safeco next month. Retweet or spread the hashtag #RoarkeGetsVedder @Kevin_Martinez @Softykjr @Mariners.”

Then, in a post on August 7th, he wrote, “Hey @PearlJam @MikeMcCreadyPJ @jillvedder77 so much good being done with #TheHomeShows, we know making space for this brain cancer warrior is a big ask. Pls help him meet his idols if you can. #PJHeals #NoOneFightsAlone #Mahalo2UBrothers.”

American football player Brad Evans tweeted about Roaake’s plight, and the story went viral. In Seattle at one of Pearl Jam’s Home concerts at Safeco Field, Roarke’s wish came true. He got to meet Eddie Vedder. The meeting and jam session was described on social media posts.

“The moment Eddie Vedder asked Roarke to play his personal guitar for him. Look at his body language… like he’s impressed and honored by my 13-year-old kid. Such a kind soul. #RoarkeGetsVedder”

Aerosmith Demands Trump To Stop Playing Their Songs At Rallies