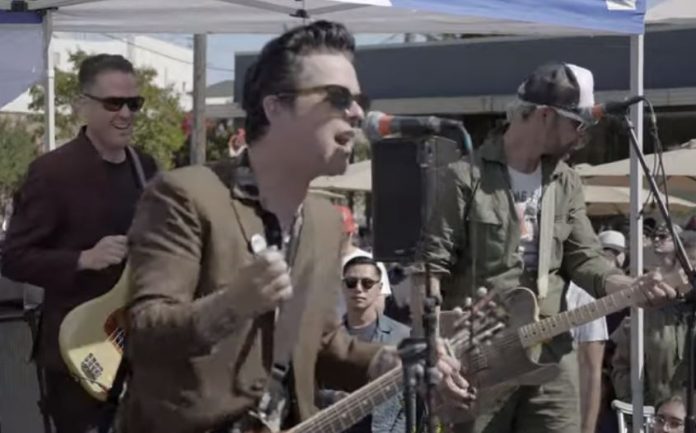 Members of Green Day made a surprise impromptu appearance at a party in their native Oakland.

Just last month, ‘The Coverups’ appeared at the 40th Street Block Party to perform an hour-long set of classics.

The punk rockers’ side project lashed through a generous set of covers. They treated the revelers to such hits as by the likes of David Bowie, The Clash Nirvana, and a whole host more.

They also covered Nirvana’s ‘Drain You’ and ‘Happy’ and ‘Jumpin’ Jack Flash’ by The Rolling Stones.

According to the NME, this comes after a similar show back on New Year’s Eve, where the band were joined by Guns N’ Roses bassist Duff McKagan. Check out footage of the full show and the setlist below.

The Coverups’ setlist was:

A Million Miles Away (The Plimsouls cover)

I Wanna Be Sedated (Ramones cover)

I Fought the Law (The Crickets cover)

Born to Lose (The Heartbreakers cover – with Kevin Preston)

Bastards of Young (The Replacements cover)

Should I Stay or Should I Go (The Clash cover)

Sheena Is a Punk Rocker (Ramones cover – with Violet Mayugba)

Dancing With Myself (Generation X cover)

Ex-Kasabian Frontman’s Girlfriend Is Standing By Her Man