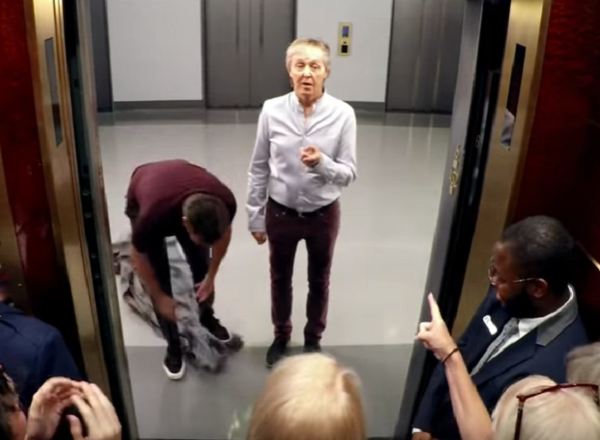 Last night saw Paul McCartney guest on The Tonight Show With host Jimmy Fallon, where the Liverpudlian surprised visitors to the 30 Rock building travelling in the elevator.

The sketch saw the former Beatle join forces with Fallon, where he and the host waited outside in the lobby as unsuspecting tourists arrived on their level to discover McCartney in various different states of leisure – including playing ping-pong, reading the paper with a pipe and slippers, and even bashing out a Beatles classic or two.

McCartney also performed the track ‘Come On To Me’ on the show, taken from his new solo album ‘Egypt Station’ which is released today.

Meanwhile, McCartney was speaking to Marc Maron for the latest episode of his WTF podcast, McCartney revealed that himself and Keith Richards had come up with an unusual business prospect while on holiday. “[We were] designing portable dog kennels that were inflatable,” he said. “It was a pretty good idea, we thought.

When questioned if a lot of weed was involved in that idea, he joked: “In the kennels? In the creative process, it was required.” McCartney elaborated “We got round to if you had one you could custom-make them for Dalmatians to be polka dot. It was a good idea, I thought.” McCartney confirmed, however, that the legends had not followed through with the idea.

The Beatle also opened up about his old band’s relationship with the Stones, saying there was no rivalry between the two groups. “The legend grew that there was a rivalry and everything, but it was the opposite,” he said. “If we had an album coming out on August 28, we’d ring them and say, ‘Have you got anything coming out?’ and they’d say, ‘Yeah, we’ve got something coming out August 17,’ so we’d put ours back a bit. It was a nice scene.”