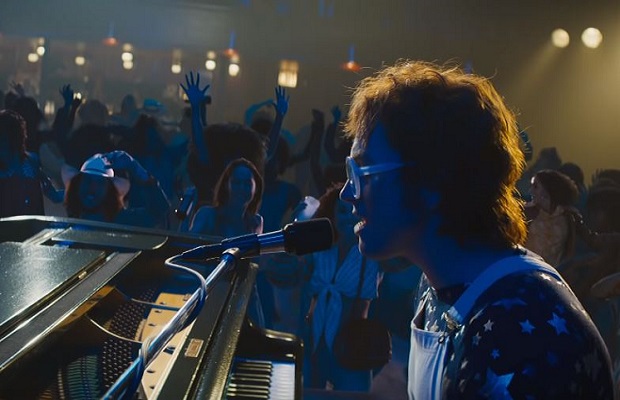 The first movie trailer for Rocketman has been shared and it offers a small preview of Taron Egerton as he takes on the role of Elton John. The promo clip is streaming below.

Due for release next summer, the film biopic charts the music icon’s journey as he gets set to release his 1972 breakthrough album, ‘Honky Chateau’. The first trailer for the film also shows that it promises to be an all-encompassing examination of Elton’s colourful career with brief glimpses shown of his childhood and battles with his personal demons.

A voiceover sets the scene, “There are moments in a rock star’s life that define who he is”. At the end of the one-minute teaser, we eventually see Egerton performing live for the first time as Elton, performing a rendition of the iconic song.

The film is directed by Bohemian Rhapsody‘s Dexter Fletcher and will also have Jamie Bell starring as Elton’s songwriting partner Bernie Taupin as well as actress Bryce Dallas Howard as his mother. Last week, the first official photograph from the movie production was shared, revealing Egerton in some of the singer’s trademark clobber.

Tom Hardy originally began work on the lead role for the long-awaited movie in 2013 but he eventually decided to pull out of the project after he struggled with the singing in the film. Speaking at the time Hardy said, “I’m not a singer. I have no idea really. I’m really trying because of Rocketman but it’s hard to open my mouth in that way.”

Check Out The Teaser For “Becoming Led Zeppelin”