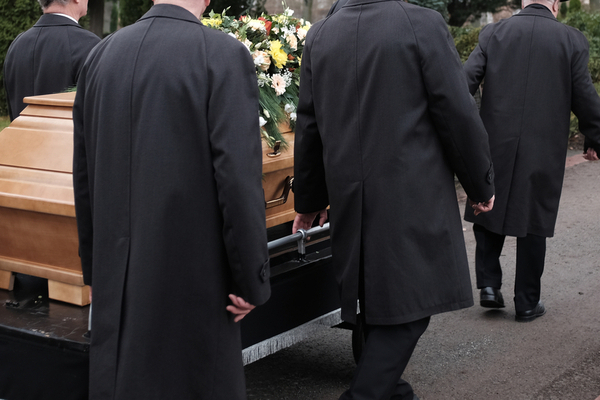 The football anthem was the most requested song at funerals held in the UK over the past year.

Each year, British funeral home operator Co-op Funeralcare releases a chart of the most requested songs at the past year’s funerals.

The perennial favourite has long been Frank Sinatra’s My Way, but this year that emotional song has been ousted at the top by Gerry and the Pacemakers’ cover of You’ll Never Walk Alone.

The Co-op found the song had been played at over 9,500 funerals last year.

You’ll Never Walk Alone was written for the 1945 Rodgers and Hammerstein musical Carousel. In 1963 Merseybeat band Gerry and the Pacemakers recorded a cover of the show tune, which spent four weeks at number one on the UK singles chart. The song was quickly adopted as the anthem for Liverpool FC, whose fans can be heard belting it out before every home match at Anfield. Celtic fans also adopted the song.

The recent revival of Liverpool’s fortunes, having won the league in 2020 for the first time in 30 years, is likely responsible for its current popularity at funeral services.

The song was also revived during the pandemic as something of an anthem for frontline workers. Last April it was covered by Michael Ball, Sir Captain Tom Moore and the NHS Voices of Care Choir to raise money for charity.

New entries in this year’s Top 10 most requested funeral songs include Tina Turner’s Simply the Best, Fleetwood Mac’s The Chain and This is Me from the movie The Greatest Showman.

The Co-op released details of some of the less respectful songs requested, including W.A.P by Cardi B ft. Megan Thee Stallion, F*** Forever by Babyshambles, Ha Ha You’re Dead by Green Day, and Ding Dong! The Witch Is Dead from The Wizard of Oz.

“Music plays such a big part in all of our lives, it’s no surprise that our favourite songs play a role in the way we say goodbye too,” said Co-op Funeralcare’s managing director Sam Tyrer. “The songs we choose for a funeral all hold unique and personal meaning for ourselves and loved ones but naturally some songs remain more popular than others and we’re delighted to unveil this year’s music chart. Each element of a funeral is a very personal choice and we’re encouraging the nation to be more open about their funeral wishes, music is a really simple and comforting place to start.”

“You’ll Never Walk Alone really has been a stand-out song over the last year, its sentiments around weathering the storm of life by coming together and supporting one another have really struck a chord with so many after the extraordinary events of the last 18 months,” said the Co-op’s funeral service manager Pauline McAvoy. “It’s a beautiful melody which carries such deep meaning.”