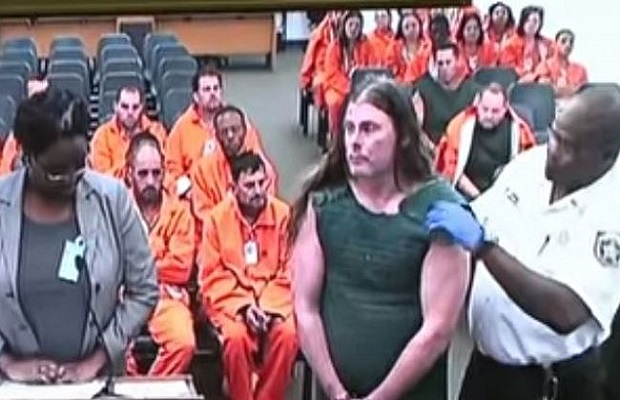 Further bizarre revelations have surfaced regarding the arrest of Pat O’Brien guitarist with Cannibal Corpse. The metaller was taken into custody on assault and burglary charges. According to CoS, the musician was keeping military-style flamethrowers in his home. It’s also reported that the death-metal guitarist was mumbling about the rapture on the night of his arrest.

O’Brien was arrested on charges of burglary and assault when he allegedly broke into a neighbour’s residence in Northdale, Florida, and threw the woman to the floor. As the incident took place, O’Brien’s home was in flames because of explosive devices inside. Firefighters tackled the blaze while ammunition continued to explode, before eventually getting the fire under control. O’Brien was tasered when authorities found him. The musician appeared in court yesterday wearing an anti-suicide vest and cuffs, and was ordered held on $50,000 bond pending a drug test.

Now, WFTS in Tampa Bay has reported that “military-style flamethrowers” were discovered inside O’Brien’s property. Soon after surrounding homes were evacuated on Tuesday as a safety precaution when officers came across an unspecified item of concern in O’Brien’s house.

WFTS also spoke to the neighbour that O’Brien allegedly broke into who informed the TV station that he reckoned O’Brien was hallucinating. The guitarist was also babbling about the rapture and claiming that someone was after him, even hiding in the closet at one point. Check out the report below.