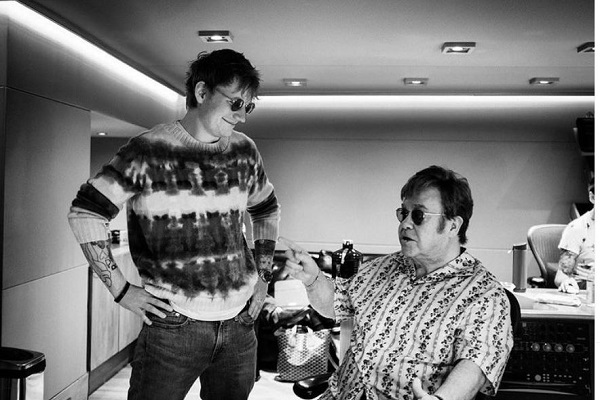 Ed Sheeran has said that Elton John phones him to have a chat every day.

Sheeran revealed that he turned to the music icon after his friend and promoter Michael Gudinski had passed away earlier this year.

This comes as Sheeran and Elton John both confirmed that they are to release a Christmas single this year.

Ed Sheeran praised Elton John, saying that he was a great support to him especially following Gudinski’s death.

“I say this to people and they think I’m lying or exaggerating, but Elton calls me every single day”, he said.

“He used to ring me about once a month – well, we do it on FaceTime via iPad because neither of us ­has a phone”, he continued. “Then when Lyra was born it became more like weekly – he’s a dad as well and he’d check in”.

He added, “But then when Michael died he rang me the day after and I just broke down and cried”.

“And from that day – I spoke to him this morning, yesterday – no word of a lie, every single day he’s rung me. Whether it’s a half-hour chat or two minutes, he always checks up on me”.

The pair have also been vying for that number one spot in the UK charts, with Elton’s recent single Cold Heart setting a little history. Following the release of this track, Elton also became the first artist to have a number one in the charts for six decades.

During a recent interview, Elton John said that taking his first line of cocaine is one of the biggest regrets of his life.

“And from that day – I spoke to him this morning, yesterday – no word of a lie, every single day he’s rung me. Whether it’s a half-hour chat or two minutes, he always checks up on me”, he told Lad Bible TV.

The Rocketman singer also described his career “unexpected”.  “Great thing about life: It throws things at you that you totally don’t expect. My career … started in 1970 and exploded. I never for saw that coming whatsoever”, he said.