Home Music News What To Expect From “Ones To Watch” – The Amazons’ gig at... 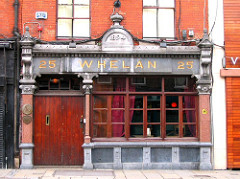 The recent release of their new single ‘Black Magic’ builds on The Amazons growing upwards momentum which was boosted with ‘Little Something’; their biggest airplay track to date.

‘Little Something’ will also feature on the band’s debut album which has been recorded with Catherine Marks in Flood and Alan Moulder’s famous Assault and Battery studio in London.

The English rock band formed in Reading in 2014 but Thomson and guitarist Chris Alderton have been friends since childhood, and the band is completed by Elliott Briggs (bass) and Joe Emmett (drums).

The most hotly tipped guitar band of the year were included in the BBC’s “Sound of 2017” and MTV’s “Brand New 2017” lists and also recently received a Q Award nomination for Best Breakthrough Act.

The Amazons have just completed their European Tour. Irish audiences will get a chance to see them in person next week when they play Whelan’s in Dublin on Tuesday.

But this wasn’t an overnight success as lead singer Matt Thomson previously put it: “The last two years we have done our own thing carving our own path and to be recognised by those platforms now has come at a good time.

The quartet first attracted a whirlwind of attention after uploaded their demo of ‘Something In The Water’ to SoundCloud. By 2015, their reputation had grown to the extent that they were invited to support The Kooks on their European tour.

The group cite Rage Against The Machine, Nirvana and Led Zeppelin – as musical influences,

When asked in a recent interview with entertainment.ie what Dublin audiences could expect from Tuesday’s gig Tomson replied, “A sweaty, apocalyptic mess”

Jimi Hendrix Film To Be Released On DVD