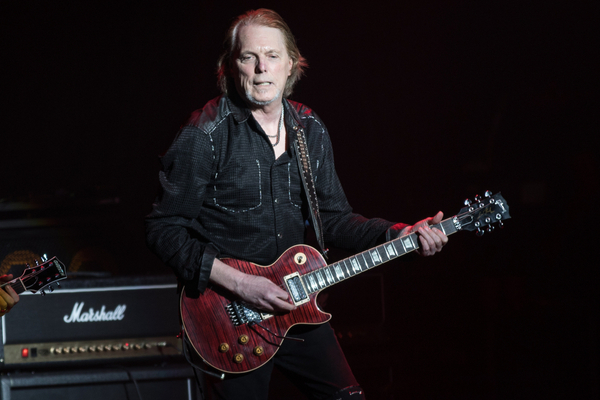 Scott Gorham has said that playing golf helped him in his recovery from heroin addiction.

The former Thin Lizzy guitarist has spoken about his childhood which even featured some run ins with the law.

“Growing up, I kept landing myself in trouble”, Gorham told Classic Rock. “I was in L.A. County Jail for four days once and it was the scariest fucking place on earth”.

He added, “So when I got the opportunity to come to London it was a chance to wipe the slate clean and start over. No one knew who the hell I was, so I could be this totally different guy. London gave me a new shot at life”.

Scott Gorham also noted one of the key lessons that he had learned in his early days was, “Don’t sell drugs to cops. This seems obvious, right?”.

Following that revelation, Gorham also went on to add, “One Labor Day weekend I went to New Mexico with my friends and when we ran out of money for gas to get home someone said, ‘Let’s just chop off a little piece of this hash we’ve got and sell it.’ A guy came over and said, ‘Hey man, do you have anything?’ and I said, ‘As a matter of fact I do…”.

He also stated, “But it turned out that the guy was a fucking cop. I was in jail for three days and they were threatening me with two to five years in the state penitentiary. I went to court, but my lawyer uncle had a meeting with the judge in his chambers, paid him $4,000 and I walked out a free man”.

Scott Gorham revealed his recovery from drug addiction was down to a different experience entirely.

“Golf saved my ass”, she said.

“When I finally tried to kick heroin, the guy staying with me to guard me could see how bored and irritable I was getting, so he said, ‘As a kid, did you have any hobbies?’ I said, ‘Well, I used to go to a driving range and smash golf balls.’ … he said, ‘OK, let’s go do that”.

He added, “I remember concentrating so hard on hitting this stupid little white ball, and for a couple of hours it made me forget all the shit I was going through. I went out again the next day, then got my own set of clubs, and never looked back”.

Earlier this month, it was also confirmed that Gorham’s former Thin Lizzy bandmate Phil Lynott’s film “Songs For While I’m Away” would be released on digital format. More on that here.

John Lennon’s Doodle Of Himself As Hitler Sells For $54,000