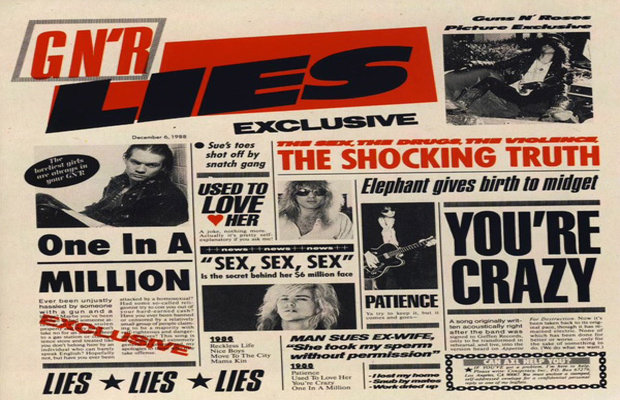 G N’ R Lies, also known as Lies, is the second studio album by the American rock band Guns N’ Roses, released in 1988. While officially an extended play, it was treated as a studio album when released. According to the RIAA, the EP has sold over five million copies in the United States alone. “Patience” was the only single released from Lies; it peaked at #4 on the Billboard Hot 100.

The first four tracks consist of the previously released EP Live ?!*@ Like a Suicide. The last four songs were recorded with acoustic guitars. They were written and recorded in only a few studio sessions (with the exception of “You’re Crazy,” which appeared in an alternate version on Appetite for Destruction), which producer Mike Clink called “one of those magical rock and roll history moments.”

In later interviews, Axl Rose stated that while he loved how the band sounded on the last four songs, he hated the sound of his voice. Rose recalled that his voice was husky and scratchy from the band’s lengthy touring at the time, and if he could he would have re-recorded his vocal tracks in a separate session.

A significantly faster version of “You’re Crazy” with electric guitars had previously been released on the band’s debut album, Appetite for Destruction, and was now recorded as originally intended. “Mama Kin” is an Aerosmith song, which appears on that band’s 1973 debut album. “Nice Boys” is a Rose Tattoo cover from their 1978 self-titled debut album. “Used to Love Her” was written as a joke after Izzy Stradlin disliked a song he heard on the radio featuring “some guy whining about a broad who was treating him bad”. Slash stated that “People think it’s about one of our old girlfriends, but it’s actually about Axl’s dog.” However, there are some suggestions that the Guns N’ Roses song “Used to Love Her” is an uncredited version of Tales of Terror’s “Danant,” given that Tales’ frontman Pat Stratford did live in Los Angeles with them for some time after Tales’ break-up and before Guns N’ Roses gained fame, they took a few song ideas from him.

The cover is a parody of tabloid newspapers, as are the liner notes. The album’s cover art underwent several minor modifications when the title was released on CD. First, in the bottom left corner reading “LIES LIES LIES” originally read “Wife-beating has been around for 10,000 years.” Secondly, instead of “Elephant gives birth to midget”, the original headline reads, “Ladies, welcome to the dark ages.” Many copies of the original LP release also contained an uncensored picture of a nude model on the inner LP sleeve.