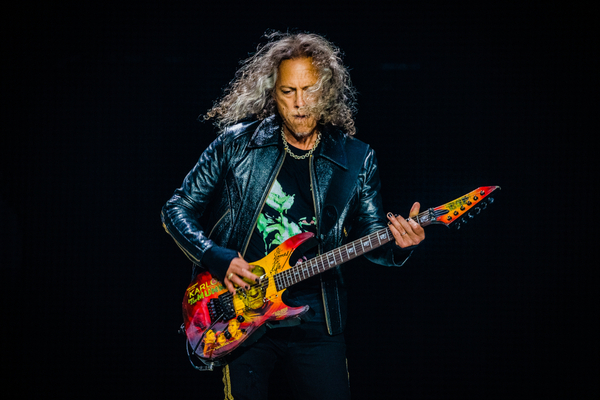 Metallica’s classic ’91 track, Enter Sandman could have sounded a lot different, with the aim being to make “the next Smoke On The Water“. In an interview with Guitar World, legendary guitarist, Kirk Hammett recently discusses the writing of Metallica’s breakthrough single with James Hetfield. The San Francisco-born guitarist says that his aim at the time was “to write the next Smoke on the Water.”

Discussing the monumental success of the band’s Black Album, the story of this huge track comes to the fore. Metallica’s guitarist, Kirk Hammett created the iconic riff of the hit track in a hotel room at “3 in the morning” while on the band’s Damaged Justice tour.

“It was something that literally came to me at three o’clock in the morning,” Hammett recalls. “I had been listening to the new Soundgarden album at that time and, you know, this was when grunge was at its earliest stage – we’re talking late 1989 or so. No one was even calling it grunge yet. But I was loving a lot of it, and it was influencing me somewhat.

Taking a moment to gain the confidence of writing a new riff, Hammett said to himself “I want to write the next Smoke on the Water”. The guitarist “just started messing around”, before creating a “swing kind of feeling going”, using the influence of Soundgarden’s dropped tunings in Louder Than Love.

“I wasn’t playing in a drop tuning, but with those tunings it’s often octave work – you get the low D, and then you go to the upper D and it sounds really heavy,” Hammett explains. “I wasn’t in drop D, I was just in E, but I was messing around with the low and high octaves, and then I threw a tritone in there, an A#, went to the A, and that’s the riff that came out.

Hammett recalls the time that first part came to him, when he felt the riff “sounds like it’s asking a question, and now I’ve got to resolve it. So that’s where the chunky chord part, with the G and F#, came in. And famously, when I originally wrote the riff, that chunky thing happened at the end of every line.”

When the band came to putting this track together, drummer Lars Ulrich added the finishing touches to complete Enter Sandman as we know it today. The track had been reworked and finally made it on to the band’s iconic self-titled album.

“Lars said, ‘Repeat the first part.’ So we changed it to where we repeat the first part three times and then the chunky chords come in. That made it hookier and bouncier – less heavy metal. It made a good-sounding riff f****** great,” said a passionate Hammett. “But if you think about the way the riff was originally – chunkier, more metal – you know, maybe it could have ended up on …And Justice for All.”

Hammett and the gang have been working on new material during the COVID-19 pandemic, with James Hetfield confirming back in May, that the band had written ten new songs via Zoom. Drummer Lars updates fans on the process of the new creations – read more here.