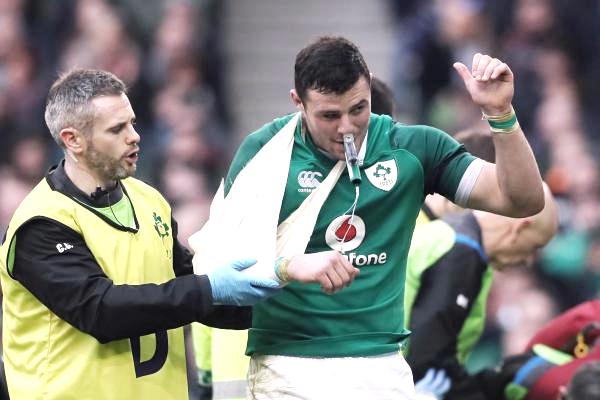 The I.R.F.U.’s medical team have assessed the Ireland rugby squad in the wake of Saturday’s 56-19 stroll against Italy at the Aviva Stadium and there’s quite a body blow for head coach Joe Schmidt as a result.

Irish rugby star centre Robbie Henshaw has undergone a procedure this morning on the injured shoulder sustained in scoring a try against the Azzurri and in a huge blow has been ruled out of the remainder of the Championship with games left at home to Wales and Scotland and potentially a St. Patrick’s Day winner takes all against the three-in-a-row chasing England.

The 24-year-old sustained the blow while grounding the ball for his second try, requiring oxygen on the field before departing with his right arm in a sling.

Better news though for front row colossus Tadhg Furlong, after he underwent a scan that revealed a minor hamstring injury but is expected to be fit for the next Six nations game with the visit of Wales to Dublin on February 24th.

The third Leinster man checked out by the docs was Jack Conan who took a bang on his shoulder, but is expected to be available for selection for Round three against Warren Gatland’s Welshmen so cruelly robbed of what appeared to be a perfectly legitimate try in their narrow 12-6 reversal by Eddie Jones’ underwhelming England side on Saturday.

The Ireland rugby squad will assemble for a mini-camp in Athlone on Tuesday as a number of players return to the provinces. The 48-hour camp culminates with a sold out open training session at Buccaneers RFC.