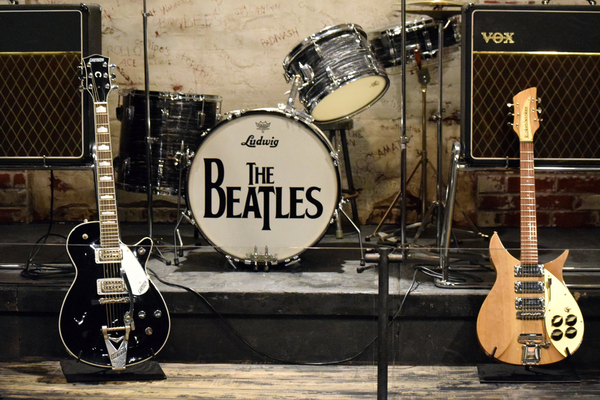 McCartney, Lennon, and Ono discuss George Harrison’s 5-day hiatus from The Beatles on a rare audio recording from 1969. As the band began its disintegration, hundreds of recordings had been made of the member’s chit chats and one biographer tells all.

While involved on Peter Jackson’s project, Get Back, John Harris gained access to recordings of many ‘fly on the wall’ conversations. Writing for the Guardian, Harris reveals some very interesting words shared between members of the Liverpool rockers. His book, Get Back, arrives on October 12th, tying in with Peter Jackson’s six-hour movie series on Disney+.

Harris explains that the day following George Harrison’s exit from rehearsals, one lunchtime chat in particular had been recorded. He wrote, “Lennon, Ono and McCartney had lunch, and recorded a remarkable conversation. On the audio I was given, it began suddenly and unexpectedly.

“Lennon: ‘I mean, I’m not going to lie, you know. I would sacrifice you all for her [Ono]… She comes everywhere, you know.’ McCartney: ‘So where’s George?’ Lennon: ‘F*** knows where George is.’ Ono: ‘Oh, you can get back George so easily, you know that.’ Lennon: ‘But it’s not that easy because it’s a festering wound… and yesterday we allowed it to go even deeper, and we didn’t give him any bandages.’

Following the 1967 death of Brian Epstein, McCartney had taken on the role of management, seeing him instated as the boss of procedures. Harris highlights other recordings which show Paul McCartney as reasonable in some situations but firm in others. In discussing how Ono became permanently attached to Lennon’s hip, McCartney said: “They’re going overboard about it, but John always does, you know, and Yoko probably always does.”

“So that’s their scene. You can’t go saying: ‘Don’t go overboard about this thing, be sensible about it and don’t bring her to meetings.’ It’s his decision, that. It’s none of our business starting to interfere in that.”

In another recording, McCartney can be heard grilling his bandmates as to whether the four-week rehearsals would actually lead up to a concert. McCartney: “We’re going to do it, or we’re not going to do it. I’ll do it. If everyone else will, and everyone wants to do it, then all right. But [laughs], you know, it’s just a bit soft. It’s like at school, you know. ‘You’ve got to be here!’ And I haven’t! You know, I’ve left school. We’ve all left school.”

The result of these intense sessions would come as the band’s final live performance which took place on the roof of the Apple Corps office in London on January 30th, 1969. Harris argues that we now know that something “crystallised in a couplet Lennon added to McCartney’s song, I’ve Got a Feeling.